By Diana Mehta, The Canadian Press 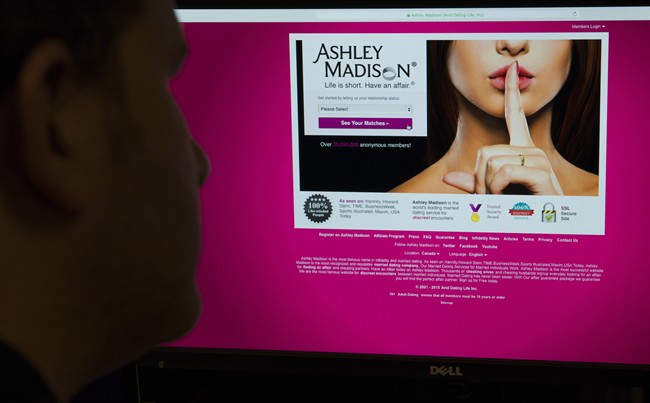 A man looks at the Ashley Madison website in this photo illustration in Toronto on Thursday, August 20, 2015. (THE CANADIAN PRESS/Graeme Roy)

TORONTO – A massive cyberattack on a website facilitating extramarital affairs is taking a toll on families across the world, Toronto police said Monday as they announced two unconfirmed reports of suicides and a string of extortion crimes related to the hack.

Police warned those responsible that their actions would not be tolerated as an international investigation into the AshleyMadison.com breach is carried out.

Evans would not provide details on the two unconfirmed suicides, but published U.S. media reports have said a police captain in San Antonio, Texas took his own life after his official email address was linked to an Ashley Madison account.

The Canadian-owned Ashley Madison site — whose slogan is “Life is short. Have an affair” — claims to have about 39 million members around the world.

The site was the victim of a cyberattack a month ago. Employees powering up their computers were greeted with a threatening message accompanied by the song “Thunderstruck” by rock band AC/DC.

Hackers referring to themselves as the Impact Team vowed to release Ashley Madison customer data unless the website was permanently shut down.

A Canadian Press analysis found hundreds of email addresses in the data release appeared to be connected to federal, provincial and municipal workers across Canada, as well as to the RCMP and the military.

“This hack is one of the largest data breaches in the world and is very unique on its own in that it exposed tens of millions of people’s personal information,” said Evans. “The ripple effect of the Impact Team’s actions has and will continue to have long-term social and economic impacts. And they have already sparked spin-offs of crimes and further victimization.”

Police said criminals capitalizing on the cyberattack were using the leaked information to try extorting people through scams that included asking for fees to purportedly delete customer data.

“Nobody is going to be able to erase that information,” Evans said, adding that anyone being extorted should report the matter to their local police force.

Evans said those responsible for the cyberattack need to know their actions are under intense scrutiny by law enforcement partners around the world, including the U.S. Department of Homeland Security and the FBI.

He addressed the Impact Team directly, saying their actions are “illegal and will not be tolerated.”

“This is your wake-up call,” he said. “We are now doing a serious investigation and inviting all our partners.”

Evans also appealed to others in the hacking community, asking them to help police because they knew “the Impact Team has crossed the line.”

Avid Life Media, the parent company of Ashley Madison, is co-operating with the police investigation, Evans said, and is offering a $500,000 reward for information leading to the identification and prosecution of the hackers.

Separately, the federal privacy commission is opening its own investigation into the Ashley Madison data breach, saying it will be probing the attack with the Office of the Australian Information Commissioner and in co-operation with other international counterparts.

The commissioner’s office has been talking with the company to determine how the breach occurred and what is being done about it.