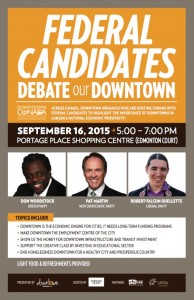 A gathering of federal election candidates will have the topic of downtown on their minds during an upcoming debate.

“This is the public’s chance to hear the parties go on the record on key issues that are pivotal in moving our province, city and our downtown forward,” said Stefano Grande, Downtown BIZ executive director.

“The continued revitalization and health of our downtown is important to our 1,300 business members, and I believe, to all of Manitobans.”

The forum is open to the public and will be held at Portage Place Shopping Centre from 5-7 p.m.