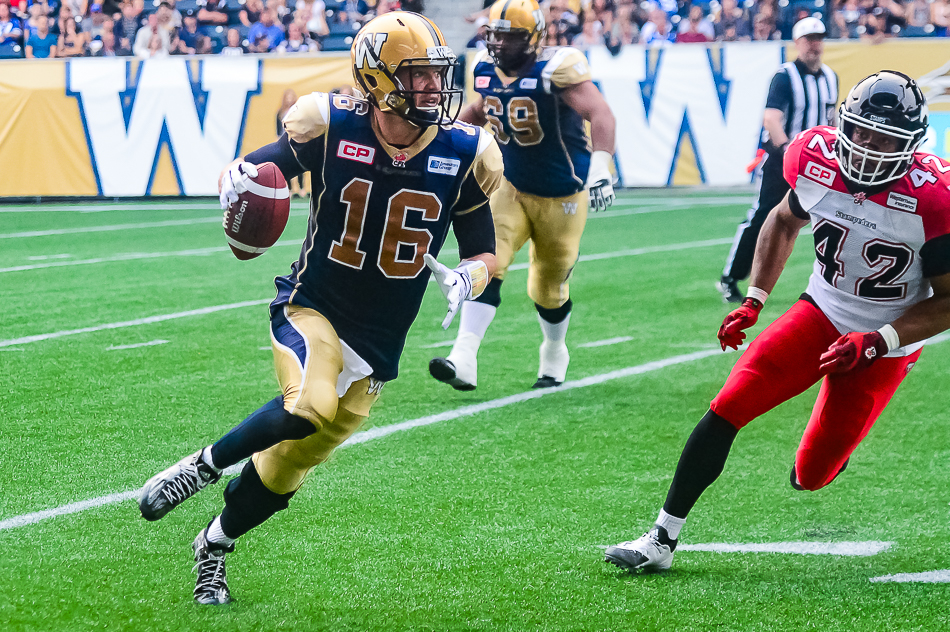 WINNIPEG — It’s no secret, the Winnipeg Blue Bombers have struggled this season without Drew Willy at quarterback. On Saturday evening, that trend showed no signs of slowing down – with Robert Marve at the helm, the Bombers offense managed just 135 yards, as the defending Grey Cup champion Calgary Stampeders ran roughshod over Winnipeg in a 36-8 win.

“It was a frustrating day at work,” said Marve. “How it went down was frustrating… I understood a lot more of what was going on, the communication was better, the result was not better.”

Compared to recent weeks, the Bombers defense and special teams both showed marked improvement. Timely plays by both kept the score close in the first half, as Winnipeg got three sacks, a blocked punt by Derek Jones and an interception by Matt Bucknor to bang up Calgary and trail just 8-3 at halftime.

That hint of promise died quickly after the break, though. On the first drive of the second half, Marve threw a pick six to Jamar Wall, putting Calgary up by two scores. Four minutes later, Calgary scored again on a Bryant Moniz quarterback draw, starting what would be a thorough 28-5 rout in second half scoring. As they have all season, the Bombers struggled with silly penalties, taking 14 for 124 yards.

“The production we had, it wasn’t good enough to win the game. You go into halftime at 8-3 and you’ve got a real shot, we let it slip through our fingers,” said Bombers head coach Mike O’Shea.

As Winnipeg falls to 3-6, Calgary improves to 7-2 and their quarterback Bo Levi Mitchell is now 22-4 in career CFL starts. Mitchell had 314 yards, two touchdowns and one interception on 19-for-26 passing, coming on strong late in the game after a shaky first half. Eric Rogers, despite seeing a six game touchdown streak come to an end, continued his dominance at the receiver position, grabbing seven catches for 152 yards.

The Bombers, meanwhile, struggled mightily on the offensive side of the ball. Marve had 94 yards and two interceptions on 12-for-20 passing, and was replaced by Brian Brohm midway through the fourth quarter. The ground game was nullified as well, as Cameron Marshall and Tyler Thomas had 34 combined yards on ten rushes. One of the few bright spots: veteran receiver Clarence Denmark returning to prominence after a couple quiet statistical weeks, collecting 50 yards on six catches.

“That’s the thing, the game’s really come down to turnovers, we can’t turn the ball over, we’ve got to sustain drives and protect our quarterback and I think that’s what we didn’t do enough of today,” said Matthias Goossen, who started at centre on a struggling offensive line.

“We’ve got to find some way to get better,” said receiver Nick Moore. “We should be executing like we do in practice, but for whatever reason we just didn’t have it today.”

The Blue Bombers now look forward to their annual back-to-back against the Saskatchewan Roughriders. The Labour Day Classic will be Sunday, September 6th at 3 p.m. in Regina, followed by the Banjo Bowl back at Investors Group Field on Saturday, September 12th. It presents a friendly opportunity for the Bombers, who have lost four straight – the rival Roughriders are 0-8 this season.