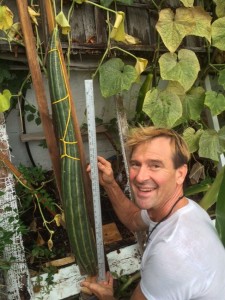 Daniel Tomelin poses for a photo with his 44.5-inch cucumber in this undated handout photo. (THE CANADIAN PRESS/HO-Daniel Tomelin)

KELOWNA, B.C. – The record for the world’s longest cucumber might belong to a Kelowna, B.C., man who’s also vying to have the longest pickle on the planet.

Daniel Tomelin, 54, said his garden has produced the king of all cucumbers, somehow splitting off from the crowd and going above and beyond his wildest expectations.

“I let the thing grow and it was just starting to touch the ground and I was kind of saying, ‘What is the world’s largest cucumber?’ I didn’t even have a clue.”

He looked online, at the Guinness World Records site, where he learned the record for the longest cucumber is 105 centimetres, or about 41.5 inches.

He said he was gobsmacked when his cuke measured 42.5 inches.

The cucumber measured 113 centimetres, or 44.5 inches, on Monday, two weeks after he filed his application.

Tomelin decided he would pickle the cucumber and also made a claim for the longest pickle in the world in a category that doesn’t exist.

Then he bought two long vases and fashioned them into one big vessel to use as a pickle jar for the dark- and light-green-striped cucumber of the painted serpent variety.

“I used my big rock saw and cut the base off of one and I glued the two together. So now it’s four feet high. And I’ve taken the base that I cut off (to use) as a lid for it,” he said of the makeshift pickle jar.

Two local gardening experts have measured his cucumber and verified his claim, Tomelin said, adding Guinness World Records has notified him that his application for the cucumber will be processed in about six weeks.

It will be about 12 weeks before he hears back about the pickle, Tomelin said.

His garden — which includes 40 to 50 varieties of tomatoes — is hearty, but he doesn’t use any “steroids” to grow his vegetables, Tomelin said.

“I’ve been doing this for more than 30 years so I’ve perfected various tricks for planting in thick organic matter.”

The secret to his success is deep-mulch gardening, which uses leaves and doesn’t allow the soil to be exposed, Tomelin said.

He collects up to 300 bags of leaves in the fall and dumps them in the ground, and that prevents up to 70 per cent less water loss, Tomelin said, adding he doesn’t do any weeding. As for the tilling, the worms and micro-organisms do that.

He said all he has to do is pre-start the plants in the spring, after the snow has melted, when the soil has been compacted and not yet exposed to temperature changes.

“The worms and the microbes have been partying hard all winter long. So the soil is super soil and anything planted in it, they’re the happiest plants on the face of the planet.”

Tomelin said his garden has been nominated for a green-thumb award by the local chapter of the national Communities in Bloom program and is becoming known locally for the giant cucumber.

“It’s just a little miracle that happened in my garden,” Tomelin said of his prized cucumber. “I have all kinds of miracles happen in that place.”

— By Camille Bains in Vancouver