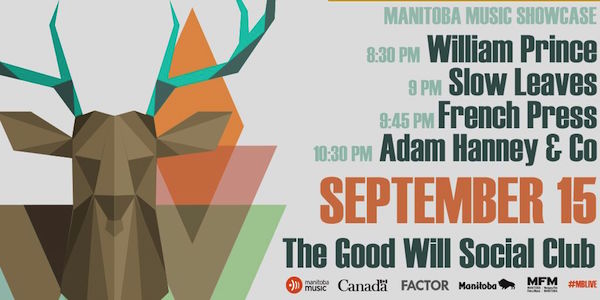 WINNIPEG — You would think summer has been hectic for local musicians given the offering of festivals and events, but fall is proving to be just as busy.

Manitoba Music is hitting 10 cities in the next three months to help bolster the careers of independent music entrepreneurs in the province.

Beginning in Halifax on September 8, the association will be at Canadian Country Music Week for a series of showcase events featuring performances by sibling country duo Petric, singer/songwriters Quinton Blair and Kendra Kay, pop country acts Leanne Pearson and David James, and others.

The attention turns to Winnipeg the following week as delegates make their way across the country on the way to the BreakOut West festival and conference in Victoria September 17-20. Manitoba acts singer/songwriter William Prince, roots raconteur Slow Leaves, indie pop songstress French Press, and indie rock act Adam Hanney & Co. will perform for the visiting industry from Belgium, the U.K. and Germany on September 15 at The Good Will.

Also on the calendar…

← Previous: Whether to Split Up Twins, Triplets in School Can Pit Parents Against Educators Next: Police Investigating Pair of Sexual Assaults →
Tags: Manitoba | Music | Winnipeg