Home » The Canadian Press » Whether to Split Up Twins, Triplets in School Can Pit Parents Against Educators

Whether to Split Up Twins, Triplets in School Can Pit Parents Against Educators 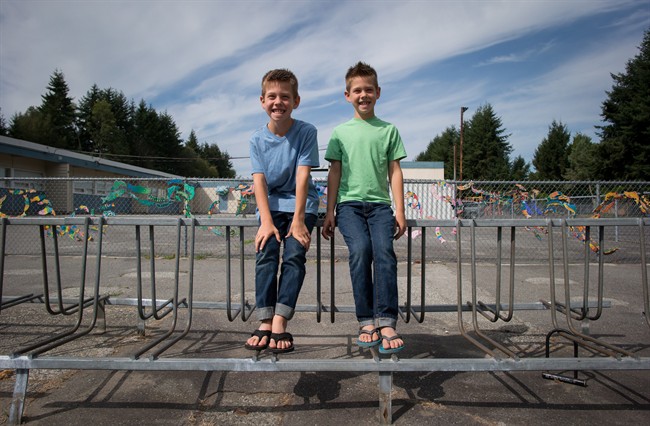 Twin eight-year-old brothers Riley, left, and Taylor Dalby sit for a photograph outside South Park School where they will enter Grade 3 this year, in Delta, B.C., on Monday August 24, 2015. (THE CANADIAN PRESS/Darryl Dyck)

TORONTO – With the new school year starting, most parents are thinking about the basics —buying supplies, preparing to pack lunches, and hoping their child gets on with their teacher and fits in with classmates.

But for parents of twins and other multiples, September means dealing with a question that moms and dads of singleton children never have to consider: should their same-aged siblings be separated or kept together? And who should decide?

Since her identical twins Riley and Taylor were in kindergarten, Sharisse Dalby says she’s had to fight to keep her boys in the same classroom at their Tsawwassen, B.C., school, where the eight-year-olds are about to enter Grade 3.

“We’ve had a lot of struggles with the teachers and the school in general,” she says, explaining that the educators believe that multiples should be split up to encourage independence and individual development.

But Dalby says identical twins typically have a special bond and for some pairs separation can be difficult, particularly at an early age. Schools, she contends, should respect a parent’s wishes.

The support and advocacy organization Multiple Births Canada recommends that decisions about classroom placement be made jointly between parents and school staff, but that doesn’t always happen, concedes spokeswoman Sheila Catto.

“I don’t think anybody in Canada has a flat policy, but some principals or some teachers may have a belief about multiples based on other kids that they’ve seen and may feel that it’s better to separate them for whatever reasons,” says the Saskatoon mother of 15-year-old triplets — two identical twin daughters and a fraternal son.

With multiple births on the rise because of delayed childbirth and reproductive technologies like IVF, whether to divide womb-mates or keep them together is a question increasingly being confronted by parents and schools, agrees Prof. Nancy Segal, director of the Twin Studies Center at California State University in Fullerton.

But it’s a mistake to make generalizations about twins just because they share a birth date, says Segal, a fraternal twin herself.

“It really is a pair-specific issue.”

“There are some children who are going to benefit by (separation), if for example they are too competitive and hostile with each other,” she says. “Or sometimes boy-girl twins can benefit because the girls tend to mature ahead of the boys, which might be a disadvantage to the little boys.

“My general sense of the field is that parents of younger twins, who have just started school, really prefer to keep them together because, after all, you’re asking twins to do extra things over what singletons do.”

It’s an adjustment for any child to leave the comfort and security of home and parents when they go off to kindergarten, but cutting off twins from each other can add to their anxiety, says Segal, whose latest book is 2012’s “Born Together — Reared Apart: The Landmark Minnesota Twin Study.”

“So my advice to schools is always to keep the twins together if the mothers prefer it and to simply put them at different tables. That way they can have access to other kids. They can develop some social ties.

“But they can also see each other. Seeing each other is really all the security they need.”

Laura Clark, a Toronto mother of identical twin boys, says she and her spouse asked the school to split up their sons in junior kindergarten to encourage them to develop their individual personalities, interests and friends.

“And because they look the same, people mix them up,” Clark says of her six-year-olds, who are about to enter Grade 1. “And we were concerned that if they were in the same class, they would just be known as ‘the twins,’ as opposed to their own names.”

Catto says each child is unique, as is each set of twins or multiples — a fact often lost on other people.

“When they’re together, other people put expectations on them about being the same or looking alike or having the same likes and dislikes and preferences and always having to do stuff together,” she says.

“And at some stage, that becomes burdensome.”

Clark says her twins, who have an older brother, sleep in the same room, play together after school and are “great buddies.”

But because one tends to be a little quieter and shyer, she and her husband thought it would be good for him to learn to talk to other kids and make friends on his own.

Such personality differences can create a potentially unhealthy dynamic between or among some same-age siblings, which is a concern for both parents and teachers, agrees Catto.

For instance, one twin may be more dominant, “always trying to do something for their co-twin and protect them and look after them,” she says. “And at some point, they may benefit from being separated and going their own way.

“I think for most multiple-birth families, ultimately separation is healthy and good, but it’s really a question of when is the right time to do it.”

Jenny Smit’s four-year-old twins, Iris and Britt, decided they want to have different classrooms as they start junior kindergarten.

“I kind of get the feeling that they would like their own space, but I don’t know for sure,” says Smit, a Toronto high school teacher.

“They’re identical, so people do mix them up. So I wonder if maybe it would be nice for them to have their own teachers so they won’t have that anymore … I just went with it because I know it often becomes an issue later on with twins with the whole separation thing.

“My girls are close, but they will do their own thing.”

Experts say there can be benefits to separation — for instance, when comparisons by teachers or peers lead one child to feel inadequate or where multiples form a “power unit” and cause disruptive behaviour in the classroom.

But Multiple Births Canada advises against dividing siblings who share a birthday and want to be together, saying forced separation can damage self-esteem, inhibit language development and delay learning.

And as children grow older, they should have input into any decision about whether to remain classmates, the organization says.

“And until one of those things happens, I don’t have the right to step in,” she says. “It’s their right to choose when they want to be separated and when they’re ready for that.

“I’ve never been a twin, so how do I have the right to know when the right time is?”