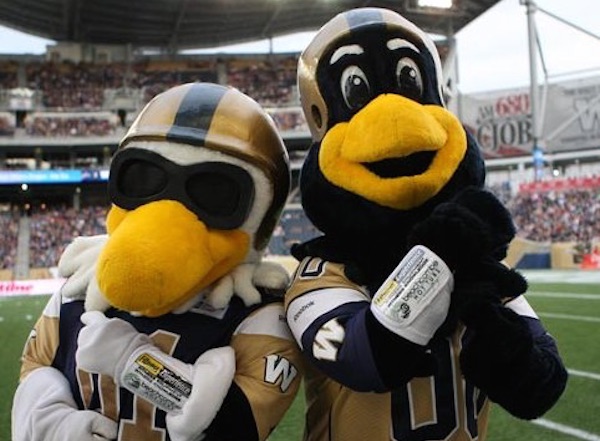 WINNIPEG – Mascots can be key characters on professional sports teams, working the crowd to make their home arena loud and proud and keeping the fans entertained.

In Winnipeg, one man has spent 27 seasons behind the mask for the Winnipeg Blue Bombers of the CFL.

James Deighton says it’s all about putting on a good show.

“There’s always something to talk about. People always find you interesting when you say you’re a mascot.”

Deighton got started as a mascot in his 20s when a friend who worked for the team tricked him into replacing an injured Buzz back in 1988.

“To be honest with you, I’m glad I was thrown into it the way I was, because I don’t think I would’ve volunteered,” he says.

Nervous at first, Deighton found himself becoming more confident as he transformed into Boomer.

“You’re now a show and that’s the thing, is to get your head into the fact you’re a show. You’re not you anymore,” he explains.

While interacting with fans is a big part of his job, getting the crowd loud to distract the opposing team has become an anticipated bit of Buzz and Boomer’s routine.

Blue Bombers’ defensive back Moe Leggett knows Buzz and Boomer personally, and has seen first-hand how the duo pumps up the team.

“They actually hype it up a lot more,” says Leggett. “It’s like you hear the fans and you see the mascot and then your heart starts to race a lot more.”

The most memorable moments of Deighton’s career so far have been celebrating two Grey Cup games with the team — first, in his rookie season and then again in 1990.

“We’d like to see another one of those, soon,” says Deighton. “I think that our fans really deserve that moment again.”

Rarely in costume now, Deighton spends most of his time as game day manager where one of his duties involves showing rookie mascots the ropes.

“I don’t even know what I would do sitting at home or just being a fan in the stands for game day,” says Deighton. “I think I need to be on the field, I need to be part of it.”

While Buzz and Boomer have evolved over the years, Deighton’s passion for mascot work has remained the same.

Due to concerns over heat exhaustion, Deighton says more than one person usually puts on the Buzz and Boomer costume each time the Bombers play.

If it’s really hot, the game day crew will actually use a different person to play Buzz and Boomer for every quarter of the game.