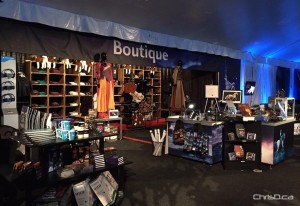 The boutique shopping area for guests to Cavalia’s Odysseo. (CHRISD.CA)

WINNIPEG — The largest travelling show of its kind is finally opening up tonight for Winnipeg audiences.

Cavalia’s Odysseo at the corner of Kenaston Bouelvard and Sterling Lyon Parkway is a traffic-stopping spectacle housed under the Big White Top. Media on Wednesday were given a 50-minute preview of what to expect and it is easily comparable — if not better — to what one would see in Las Vegas or at Walt Disney World.

The $30 million theatrical experience hasn’t even held its first show yet, but demand is so great that ticket sales have already exceeded a record-breaking 35,000.

“We just added two more weeks (of shows) to respond to the demand,” founder and artistic director Normand Latourelle said. “I hope winter will come later this year, but we’re familiar with that because we’re from Montreal.”

Crews at the Wilkes Avenue site are working to fill up craters of mud caused by last week’s torrential rainstorm in the parking lot. Latourelle said the site will be smooth again in time for guests’ arrival tonight. The “raw site,” as he called it, required 120 semi-trailer trucks of rock to be unloaded to form the construction base for the show.

About 250 local workers were hired for the setup of the tent, which will house 65 horses and 45 artists as part of the show.

Tickets are available through Ticketmaster and Cavalia.net. Odysseo runs until October 18.

Odysseo by the numbers: