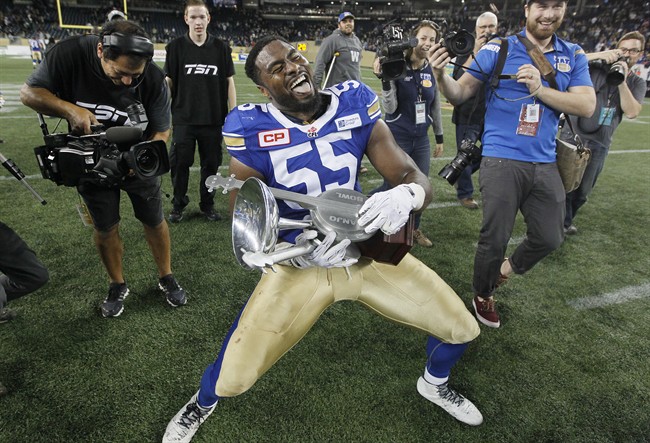 WINNIPEG — A Banjo Bowl for the ages? That it was not. The Winnipeg Blue Bombers will be happy to leave with a win, though, as they dominated the second half to beat the Saskatchewan Roughriders 22-7 and end a four game losing streak.

35,156 in blue, gold, and occasionally green bore witness to a game whose quality was split clean down the middle. Winnipeg turned the ball over five times in the first half, in every way imaginable – on downs, on interceptions, and on a sack fumble. In the second half, though, freshly minted starter Matt Nichols and the offence came alive, outscoring the Riders 19-0.

“Now, the directive is to get consistent,” said Bombers head coach Mike O’Shea. “They came out, rebounded, down four turnovers in the first half and they just made up their mind that that wasn’t going to happen in the second half… They made some big plays, that’s where we’re setting the bar at.”

Yes, Nichols’ performance was blemished by two interceptions. Neither were particularly on his shoulders, though, as they came on a blindside sack and a bobbled reception. His other stats held up to a solid outing, as he had 283 yards and one touchdown on 21-for-30 passing.

“We were able to build off things and tonight, I definitely had the most fun I’ve had since college. Getting back to that is awesome,” said Nichols. “It’s really feeling the belief from the guys, the fans, the coaching staff. As a quarterback, you have to be in that position where everyone believes you and trusts you and I feel like I have that here.”

“At times, that was kind of lost to me in Edmonton. I’m excited, you can’t play quarterback thinking when am I going to get pulled next… so to be able to go out there and have these guys believe in me and be able to perform for them is awesome.”

Wideout Nick Moore was also exceptional, netting 103 receiving yards on just three catches. Unfortunately, Moore’s night was cut short, as he left in the second half with a lower body injury. Julian Feoli-Gudino had the team’s lone touchdown reception.

“I’m happy I was able to contribute with the team today,” said Feoli-Gudino. “[Nichols] is a starter, you can see it. He’s a great quarterback, he knows what he’s doing out there, he’s calm. He made some great decisions and we’re pretty pumped about him.”

Backup running back Chevon Walker outperformed those in front of him with 42 yards on ten attempts, as Winnipeg’s running game finally came alive behind a rejuvenated offensive line.

“I feel like it was a make-or-break game. One thing we got from this game is that we know we can win,” said offensive lineman Stanley Bryant. “We know it’s going to be a hard fight no matter who we’re playing, but we know we can do it as long as we work together and do it as a team. We learned a lot of that on the sideline and on the field.”

Winnipeg’s defence was also a big factor in the win, keeping Saskatchewan’s first half scoring in check despite the flurry of turnovers. The game was sealed on their play, too, as Khalil Bass snapped up Riders quarterback Brett Smith’s sack fumble and returned it 58 yards for the touchdown early in the fourth quarter.

The defence found multiple ways to disrupt Smith, hurrying him constantly and finishing five sacks. All said, Smith struggled in his total of 138 yards, one touchdown, and two interceptions on 13-for-28 passing. Jerome Messam led Riders running backs with 41 yards on nine attempts, on a night where his team’s total offence came to just 169 total yards.

Winnipeg is now a respectable .500 in Banjo Bowl games, with a 6-6 record. Their record in 2015 improves to a less respectable 4-7, but a playoff spot is still in sight (you’re never too far out in the CFL). With the loss, Saskatchewan drops to 1-10.

The Blue Bombers now take their winning streak out East, with a game in Montreal next Sunday at noon sharp. Winnipeg returns home to play Calgary the following Friday, September 25.