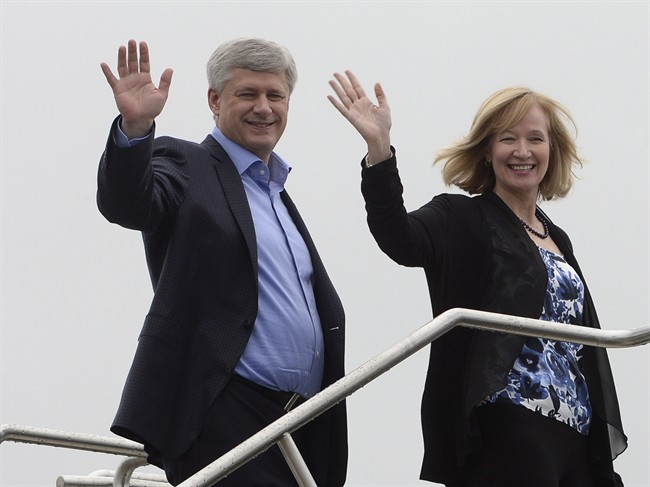 Conservative Leader Stephen Harper and his wife Laureen wave as they board the campaign plane in Ottawa, Sunday, September 13, 2015. (THE CANADIAN PRESS/Ryan Remiorz)

NEEPAWA, Man. — Slowly but surely, candidate signs are going up across the constituency. But they aren’t the only signs that we’re in the midst of an election.

If you’re paying attention to any media, you’ll notice an absence that can only mean we’re in an election– there is no federal government advertising.

A ban on government advertising during an election is common and it makes sense. It prevents the party in power from trying to buy voters with lavish spending announcements as they make their final decision and head to the polls. Having such bans in place help to level the playing field between the party in power and those in opposition.

The rule is meant to protect the integrity of the democratic system, but something strange has happened in its application. In many cases, the government skirts the rules while citizens miss out on important information.

For example, Farm Credit Canada is currently in the midst of Drive Away Hunger, a major national food drive. Food collected during Drive Away Hunger is essential to many local food banks, including the one in Neepawa, and will sustain them for most of the year. But many people don’t know it’s currently taking place.

FCC wanted to advertise the food drive, which ends Oct. 23, but they were told they couldn’t, because we are in the middle of election. Election advertising rules prevent FCC, a financially self-sustaining federal Crown corporation, from advertising a food drive. Few people would confuse FCC for a branch of government and nothing in their corporate branding would lead you to believe that. Their name ties them no more to the government than do those of other lenders with similarly national names, such as the Canadian Imperial Bank of Commerce of the Royal Bank of Canada.

The problem is that the government can still announce a wave of new funding just before an election is called, something we saw earlier this summer by the federal government. Yet election advertising laws prevent FCC from promoting their food drive.

A similar story holds true provincially. During this spring’s byelection in the Pas, any communication from the government was essentially shut down. For example, Manitoba Agriculture, Food and Rural Development staff weren’t allowed to submit their articles– there were no crop reports, tips on managing pasture or columns about rural development published anywhere in the province for the duration of the election, which took place in April.

While we were deprived information provided by local public servants for the better part of a month, the provincial government announced a lot of new spending the day the byelection was called, including: support for a feasibility study to look at new ways to use the Town Centre in Churchill; $175,000 in shops upgrades for training and skill development in rural schools and $500,000 in upgrades to two northern school technical training programs. The day before, they announced $78 million in major infrastructure projects in the north, many in the Pas.

So while voters in the Pas got some goodies weeks before they headed to the polls, farmers didn’t get the valuable information about seeding progress and crop outlooks provided by public servants. The connection is tenuous; I fail to see how knowing about the soy bean crop around Brandon will in any way influence voters in the Pas?

I fully support laws and regulations aimed at levelling the playing field between parties and ensuring an unbiased election. The problem with the law as it stands is that the only ones not obeying the letter and intent of the law are the are the governments in power come election time.