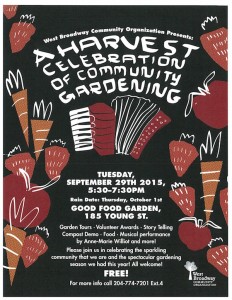 WINNIPEG — It was a successful season for community gardening in the city and the West Broadway Community Organization plans to celebrate.

“With a bumper crop, the addition of 10 new compost bins, a new community garden site, and the development of several tall grass prairie gardens, there is much to celebrate in West Broadway,” said Greg MacPherson, executive director of WBCO.

MacPherson also points to the Spirit Park, one of West Broadway’s largest and most celebrated community gardens, marking its 12th anniversary this year.

An upcoming garden party on Tuesday, September 29 is meant to bring together gardeners and supporters of community gardening. Garden tours will be provided, along with local food prepared by the Good Food Club, a composting demonstration, volunteer awards and live music by Anne-Marie Williot.