Home » The Canadian Press » Audience There But Not Money: CBC CEO Disputes Harper Comment Over Funding

Audience There But Not Money: CBC CEO Disputes Harper Comment Over Funding 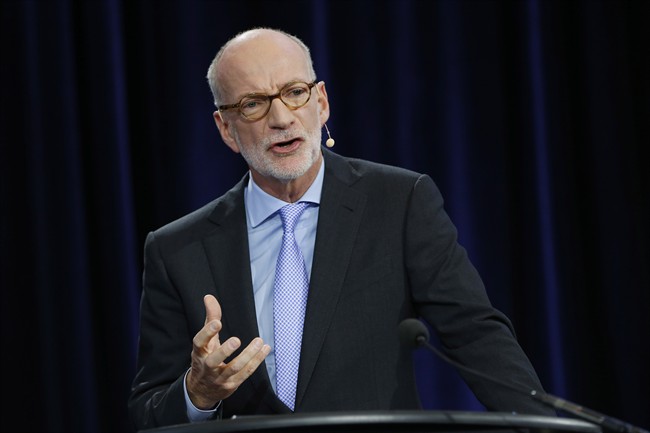 Hubert Lacroix, President and CEO of CBC/Radio Canada, speaks at their annual public meeting at the University of Winnipeg in Winnipeg, Tuesday, September 29, 2015. (THE CANADIAN PRESS/John Woods)

WINNIPEG – The head of the CBC is hitting back at Conservative Leader Stephen Harper over comments the national broadcaster is floundering because of low ratings rather than a lack of funding.

CEO Hubert Lacroix says the CBC has healthy ratings, but is crippled by a broken funding model.

“It’s not about a lack of audience,” he said after the CBC’s annual general meeting in Winnipeg on Tuesday. “It’s about a broken finance model that doesn’t work, that used to be built on advertising revenues supporting a drop in parliamentary appropriations. In this environment, it doesn’t work anymore.”

The 2012 federal budget cut CBC’s funding by $115 million over three years. Last year, the broadcaster said it faced a $130-million shortfall — compounded by the loss of broadcast rights to NHL games — and was cutting 657 jobs

Harper told a private radio station in Quebec that the CBC’s budget crunch isn’t due to government cuts, but because of its low ratings.

“The reason for the difficulties aren’t the cuts,” Harper said in an interview broadcast Monday. “There aren’t cuts. The reason is the loss of (CBC’s) audience. It’s a problem for the CBC to fix.”

There is a limit to state subsidies, he added.

Lacroix wouldn’t answer when asked whether he thought Harper’s comments were fair.

“But I’m going to tell you it’s not because of our ratings that we have a problem at CBC-Radio Canada.”

Canada must look to other European countries for ideas on how to fund public broadcasting, Lacroix suggested. France and Spain collect revenue from Internet service providers, while the United Kingdom uses a licensing system based on the purchase of a television to raise cash.

Germany has a household fee, which others are interested in adopting as people increasingly turn to digital platforms, Lacroix said.

“People are no longer buying television sets. We should have a conversation about what’s the best funding model for us. We can’t continue in this environment.”

The Liberals and the NDP are promising to restore funding to the CBC. But even with a cash injection, Lacroix said, the broadcaster would not change its strategic plan.

The CBC plans to focus on its digital platform and has a goal of doubling its users to 18 million a month by 2020, he told the meeting.

It is also paring down its supper-hour television newscasts to between 30 and 60 minutes and is adding local TV news inserts throughout the evening.

Lacroix said that contrary to claims by the union for CBC employees, the broadcaster is not planning a “fire sale” of its property, but will consolidate where it makes sense.

Carmel Smyth, president of the Canadian Media Guild, said Lacroix is not underlining how pivotal the Oct. 19 election is for those who value the CBC.

“For 80 years, the government has funded the CBC. It has given it a set mandate that the CBC has to comply,” she said. “For Mr. Harper to suddenly say the problems are not a result of his funding cuts boggles the mind.

“The CBC is in a funding crisis. It has all these programming responsibilities and it just can’t keep doing them with the funding at the level that it’s at.”

← Previous: New Arch, Fountain Monument at The Forks Next: U of M Students to Deliver Pledge on Truth and Reconciliation →
Tags: Canada | CBC | Stephen Harper | Winnipeg