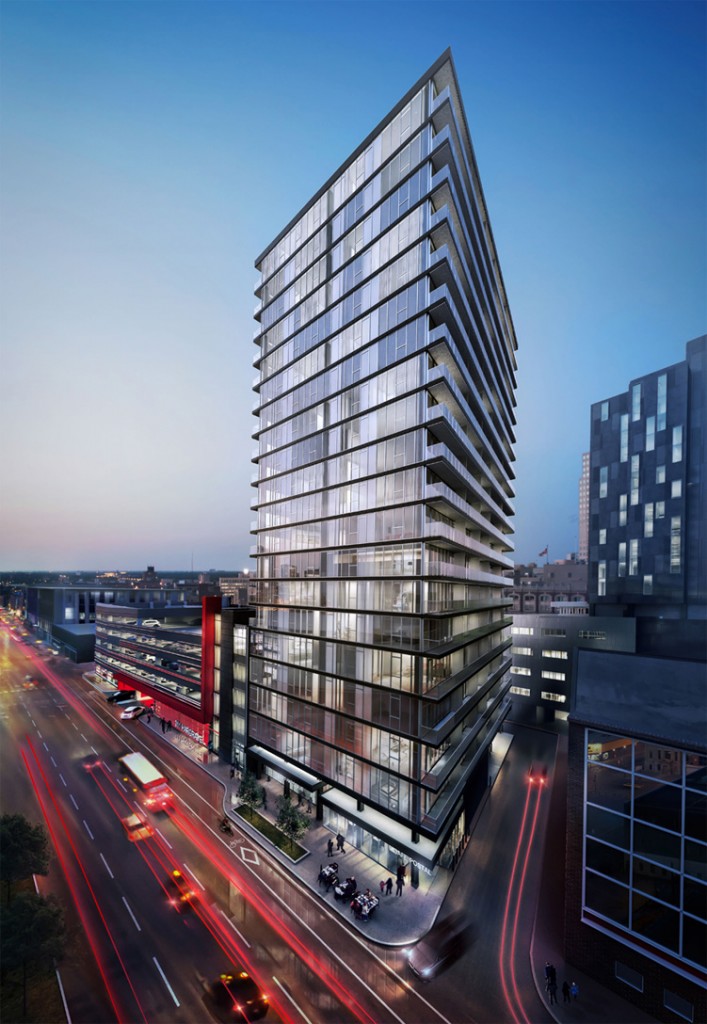 An artist’s rendering of the Glasshouse Skylofts. (GLASSHOUSEWINNIPEG.COM)

A 21-storey residential condominium development in downtown Winnipeg is just over a year underway since breaking ground.

Glasshouse Skylofts is the 200-suite project by Urban Capital Group, combining an urban lifestyle experience in the heart of the city with the luxury, entertainment and amenities expected from a modern living space.

ChrisD.ca and the Winnipeg Free Press were the only two media outlets invited along for an exclusive construction tour on Tuesday.

David Wex with Urban Capital says about 150 of the units have already been pre-sold to buyers. He expects the building to be completely spoken for once it opens in spring 2016.

“The initial response is similar to what has happened in other markets across the country where we’ve been the first into an area,” Wex said when the project was in its infancy stages.

Making use of natural light is one of the key components of the development at 311 Portage Avenue, with floor-to-ceiling windows in the units to maintain the open concept.

“We tested all the glass in a lab at Red River College to look at its performance in serious temperatures,” Wex said, pointing out Winnipeg’s extreme winter climate.

“Before we went ahead with this, we did pretty extensive thermal modelling and basically created a chamber with these windows in it to see how they perform.”

Buyers are expected to begin moving in by May or June of next year, with suite tours taking place in April. Wex anticipates about a three-month move-in timeline into next August to account for all logistics. 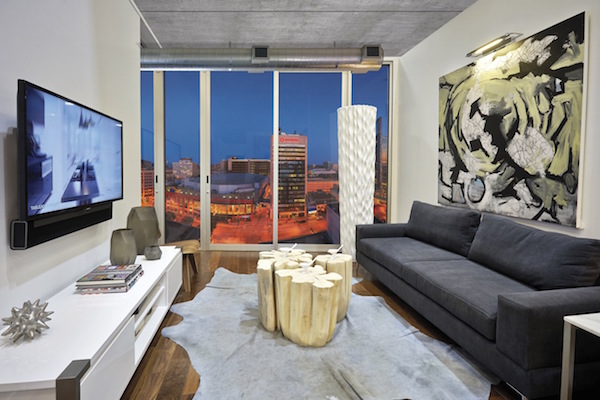 An artist’s rendering of a furnished suite inside Glasshouse Skylofts. (GLASSHOUSEWINNIPEG.COM)

At 21 storeys tall, the rooftop patio is another amenity offering up stunning views of the cityscape. An outdoor terrace will include a fire pit, lounge and resort-style cabanas, and an entertaining area for guests. The second floor will have a private screening room and fully equipped gym.

“One of the philosophies of smaller units is that the amenities have to be good, because a lot of that is also your extended living space,” Wex added. “For us, you could bowl in these units, because they’re very large by our standards.”

A pop-up unit is available for viewing at the Glasshouse sales office, located in Winnipeg Square at 360 Main Street.

The $35 million project is being developed by Longboat Development Corporation and Bockstael Construction Limited. Once complete, it will be part of a larger $135 million Longboat project, taking in the 15-storey Alt Hotel, a five-storey, 400-stall parkade on Hargrave Street, and the newly-opened Merchant Kitchen and Bar on Donald Street.

← Previous: U of M Students to Deliver Pledge on Truth and Reconciliation Next: Small Businesses the Most Hurt by Minimum Wage Increase: CFIB →
Tags: Construction | Real Estate | Winnipeg