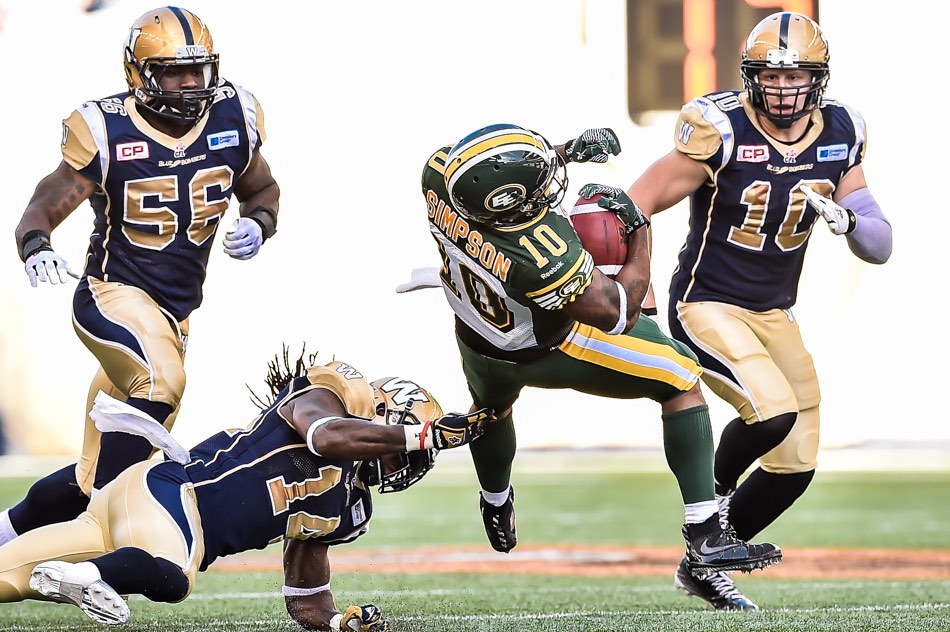 WINNIPEG — Five kicks missed on one side, a game-winner on the other. Rarely does a game so clearly come down to the skinny guys behind the tee, but Saturday’s tilt between Edmonton and Winnipeg was just that. In the end, it was Eskimos kicker Sean Whyte with the 53-yard winner, giving his team a 24-23 win in front of 24,179 at Investors Group Field.

You’ve realized then, by process of elimination, it was Winnipeg kicker Lirim Hajrullahu who missed five times. Late in a season that’s gone from below-average to brutal, the sophomore missed field goals from 43, 44, 42, and 40, along with a one-point convert, to total 13 lost points for the Bombers. His record going back isn’t gleaming, either; he’s made just five of his last 13 field goal attempts dating back to September 6 and is just 15-of-21 on one-point converts this season, the lowest make percentage in the CFL.

“Lirim had a bad day,” said Bombers head coach Mike O’Shea. “So, obviously, we have to look at how we’re going to win games going forward, but at first glance, he had a bad day. He was kicking at over eighty percent before that, so… it’s a tough one, it’s a tough for one for him too.”

“Lirim’s a guy that we believe in, he’s our guy… you go through a whole season and only a handful of balls hit the upright. For that to happen, it’s just bad luck,” said Bombers quarterback Matt Nichols. “We need to make some plays on offence, especially in the first half, so we’re not having to go on last-minute field goal drives at the end of the game.”

Despite that slow first half, where Winnipeg had zero rushing yards and just 81 total yards of offence, Nichols had a strong second half against his former team, totalling 320 yards and a touchdown on 22-for-39 passing. His throwing touchdown went to Nick Moore, who also turned it on after dropping three passes in the first half, getting 86 yards on six receptions. Clarence Denmark also had good numbers for the receiving corps, grabbing three balls for 95 yards.

“It was probably the worst half of my life followed by the best half of my life,” said Nichols. “That’s why there’s four quarters, it takes a little bit to get going and one thing can spark it… I felt like I barely got hit in the second half, so the guys did a good job of coming out and responding.”

“We have to be better in the first half,” said receiver Rory Kohlert. “We just made a few adjustments and Matt was playing really well, he was getting protection, and receivers were making plays.”

Beyond Hajrullahu, the rest of Winnipeg’s special teams had a similar up-and-down outing. Kick returner Troy Stoudermire opened the game with a fumble, giving Edmonton field position inside the 25 for an eventual field goal. He responded late in the first quarter, though, returning a kick 78 yards for a touchdown that proved important in the midst of an offensive slump.

Edmonton, meanwhile, stagnated late as the Bombers defence tightened. Quarterback Mike Reilly had impressive numbers with 298 yards on 30-of-42 passing, but two interceptions gave Winnipeg good field position on a couple occasions. The Eskimos, true to their now 10-4 record, did enough to win in a game they never looked too confident in. Winnipeg, meanwhile, is now 4-10.

As they try to turn their season around and grab the final playoff spot, the Bombers will play an important Saturday night game against the B.C. Lions on October 10. Kick off is 9 p.m. After another week on the road, they return home on October 24 to play Ottawa.