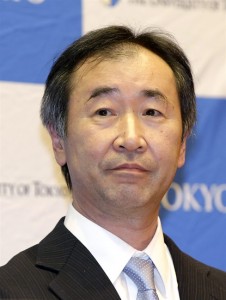 Takaaki Kajita of Japan, director of the Institute for Cosmic Ray Research and professor at the University of Tokyo, attends a press conference after learning he won the Nobel Prize in physics at the university in Tokyo, Tuesday, Oct. 6, 2015. (AP Photo/Eugene Hoshiko)

STOCKHOLM – Arthur McDonald — a professor emeritus at Queen’s University in Kingston, Ont., and the director of the Sudbury Neutrino Observatory in northern Ontario — is a co-winner of the 2015 Nobel Prize in Physics for his work on tiny particles called neutrinos.

McDonald and Japanese scientist Takaaki Kajita were cited for the discovery of neutrino oscillations and their contributions to experiments showing that neutrinos change identities.

“The discovery has changed our understanding of the innermost workings of matter and can prove crucial to our view of the universe,” the Royal Swedish Academy of Sciences said in announcing the award early Tuesday.

McDonald, who spoke to reporters by phone from his home in Kingston immediately after the prize was announced, said being named by the committee is a “very daunting experience, needless to say.”

“Fortunately, I have many colleagues as well who share this prize with me.”

McDonald said they have put in a “tremendous amount of work” and that he benefited from having a “very friendly collaboration among scientists from Canada, the United States, Britain, and Portugal.”

He said that group will help him “enjoy the moment” when he has a chance to speak with them.

McDonald said there was a “eureka moment” when they were able to see that neutrinos were able to change from one type to another in travelling from the sun to the Earth.

“Neutrinos are among the fundamental particles (which) we do not know how to subdivide any further. Therefore, their position within the models of physics at the most fundamental level is very important,” he said.

“When you do not know whether they have mass, it’s otherwise difficult to understand how to incorporate them into those theories that give us a more complete understanding of the world of physics at the most fundamental level. Discovering this property helps us tremendously in this regard.”

McDonald, 72, is a native of Sydney, N.S., who studied at Dalhousie University in Halifax in the mid-60s and later at the California Institute of Technology. He was made an Officer of the Order of Canada in 2006.

McDonald and Kajita, who is the director of the Institute for Cosmic Ray Research and professor at the University of Tokyo, will split the prize money, the equivalent of about $1.3 million Cdn (8 million Swedish kronor).

Kajita seemed flummoxed at a news conference organized by his university. “My mind has gone completely blank,” he said after taking the stage. “I don’t know what to say.”

After getting his composure back, he stressed that many people had contributed to his work, and that there was much work still to do.

“The universe where we live in is still full of unknowns,” he said. “A major discovery cannot be achieved in a day or two. It takes a lot of people and a long time. I would like to see young people try to join our pursuit of mystery solving.”

Neutrinos are minuscule particles created in nuclear reactions, such as in the sun and the stars.

For decades the neutrino remained a hypothetical particle until American researchers proved that it was real in 1956.

There are three kinds, or flavours, of neutrinos and the laureates showed they oscillate from one flavour to another, dispelling the long-held notion that they were massless.

Kajita showed in 1998 that neutrinos captured at the Super-Kamiokande detector in Japan underwent a metamorphosis in the atmosphere, the academy said.

Three years later, in Canada, while working at the Sudbury Neutrino Observatory, McDonald found that neutrinos coming from the sun also switched identities.

“A far-reaching conclusion of the experiments is that the neutrino, for a long time considered to be massless, must have mass,” the academy said.

McDonald said that scientists would still like to know the actual masses of the various forms of neutrino. And experiments are looking at whether there are other types of neutrinos beyond the three clearly observed.

The idea that neutrinos could transform from one type into another was first put forward by the Italian physicist Bruno Pontecorvo in the late 1950s, but scientists’ understanding of the process was rather vague until Kajita announced his discovery in 1998, said Antonio Ereditato, director of the Albert Einstein Center for Fundamental Physics at the University of Bern, Switzerland.

“This was a big shock because he proved in a statistically significant manner … that neutrinos oscillate,” said Ereditato. “Then Art McDonald explored another channel using solar neutrinos. It came after Kajita but he also proved neutrino oscillation in another channel. The two deserved this award.”

Neutrinos are the second most abundant particles in the universe after photons, “so any property of neutrinos can have dramatic repercussions on the life of the universe and on its evolution,” he said. “This is really one of the milestones in our understanding of nature.”

The University of Tokyo said in a statement congratulating Kajita that he was one of the students of 2002 Nobel physics winner Masatoshi Koshiba, who also has contributed to Japan’s neutrino research.

On Monday the Nobel Prize in medicine went to scientists from Japan, the U.S. and China who discovered drugs that are now used to fight malaria and other tropical diseases.

The prize announcements continue with chemistry on Wednesday, literature on Thursday, the Nobel Peace Prize on Friday and the economics award next Monday.

Each winner will also get a diploma and a gold medal at the prize ceremony on Dec. 10.

— By Alan Black in Toronto with files from the Associated Press

← Previous: Morden's Fossil Museum Wins for 'Event of the Year' Next: Theory of a Deadman at Club Regent in January →
Tags: Canada | Science | Toronto