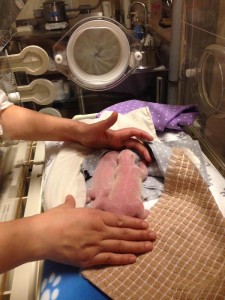 Let’s all collectively give one giant awwwww.

“Er Shun,” one of two giant pandas on loan from China, has given birth to two cubs at the Toronto Zoo.

The zoo tweeted Tuesday that the first panda cub arrived at 3:44 a.m. ET. The two appear to be healthy and doing well, weighing 187.7 grams and 115 grams.

“Zoo staff & giant panda experts are monitoring Er Shun and cubs 24/7 as the next few days and weeks are critical,” the zoo said.

The zoo’s other panda, a male named Da Mao, was given the opportunity for a “natural insemination,” but the two bears didn’t hit it off. Er Shun was inseminated without surgery with frozen sperm taken from Da Mao through a process called “electro-ejaculation.”