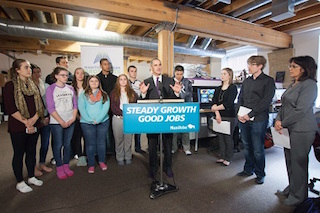 A $7 million loan from the Manitoba government is expected to create more than 100 jobs at Loewen Windows.

The Steinbach-based manufacturer employs 500 people and will see an additional $1.3 million provided for training assistance.

“As Canada’s largest wood window builders, Loewen Windows has an international reach, but it knows its biggest impact is creating good jobs here in Steinbach,” said Jobs and the Economy Minister Kevin Chief.

“We want to help and this loan means it can hire more than 100 new people right here in its hometown.”

The investment builds on the company’s existing five-year, $32 million strategic plan to create up to 180 jobs. Staff will also be trained in areas such as new equipment and technology use, and process and quality improvement.

The funding is coming from the Manitoba Industrial Opportunities Program (MIOP), which carries interest with repayable terms attached to it.