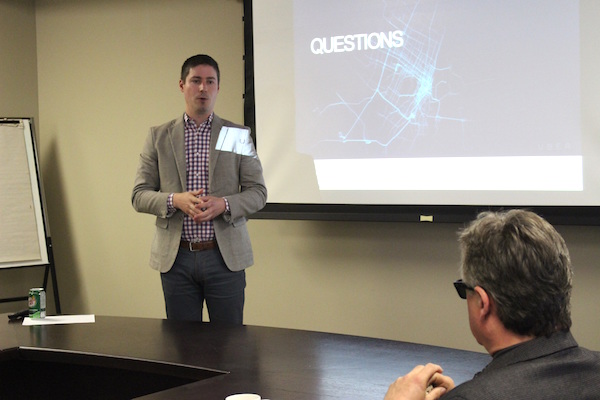 WINNIPEG — Chris Schafer would have much preferred a ride with an Uber driver than take a taxi to get around Winnipeg today, but he didn’t have much choice.

And that is what the manager of public policy for Uber Canada hopes will change as the burgeoning company attempts to reach out to Winnipeggers and policy makers by demystifying what the ride-sharing company is all about and eventually offer the service here.

Earlier on Wednesday, the Winnipeg Chamber of Commerce hosted a live on-stream presentation given by Schafer whose goal was to describe the service and convince decision makers to let Uber into this market.

Uber is a mobile app accessed through a smart phone. Consumers submit a trip request which is then routed to Uber drivers who use their own cars. It’s a credit card only, no “street hail” type of service. It’s already operating in a number of cities worldwide. In Canada, it has emerged in places such as Ottawa, the Greater Toronto Area and Edmonton.

“There is a high consumer demand for choice,” said Schafer. “It’s what people want. And we know people in Winnipeg want it. The challenge is getting those who make the rules to get onboard and embrace this innovative way of getting around. It’s why we are trying to have a meaningful dialogue so we can answer questions and demonstrate why we should be allowed to operate here.”

The taxi industry in Winnipeg, as has been the case in other jurisdictions, is set against Uber coming on the scene.

“We aren’t hostile to competition, but the members of the Winnipeg Taxi Alliance are concerned with the manner Uber has conducted itself in other cities and countries,” said Luc Lewandoski, spokesperson for the “Trusted Transit” campaign. “This company has consistently thumbed its nose at local laws and regulations designed to protect passengers, drivers and the local transit system.”

Schafer respectfully disagrees with the concerns launched by the taxi industry, saying Uber already “subjects itself to a high degree of scrutiny.”

“We conduct criminal background checks on our drivers and the technology we use allows not only our drivers, but our riders to be rated,” said Schafer.

Schafer said he’s not sure if today’s exercise has them any closer to bringing Uber to Winnipeg, but he said they are not about to abandon their drive to eventually make it happen.

“Not even having offered the service in this market, we already have public support for it, and I believe that demand will continue to grow as Winnipeggers see us expand and multiply in other cities.”