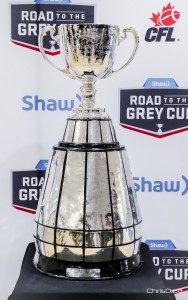 The Grey Cup is en route to northern Manitoba aboard VIA Rail. (JEFF MILLER / CHRISD.CA)

The Cup is being transported by VIA Rail to tour 11 cities leading up to the Grey Cup next month at Investors Group Field.

“Although Winnipeg will be hosting the Grey Cup Championship Game on November 29, we want the whole province to participate in the Grey Cup excitement. We are connecting with thousands of rural and northern Manitobans to make sure they can also enjoy the Grey Cup spirit,” said Jason Smith, president of the 103rd Grey Cup Festival.

Churchill will see the cup visit for a three-day stay October 22-24.

The Grey Cup will arrive back in Winnipeg on October 26 to await the Grey Cup Festival official kick-off at the Manitoba legislature at 3 p.m. on Wednesday, November 25.

Details on all Grey Cup Festival events can be found at 103greycupfestival.ca.