Harper Steps Down as Leader as Conservatives Reduced to Opposition Status 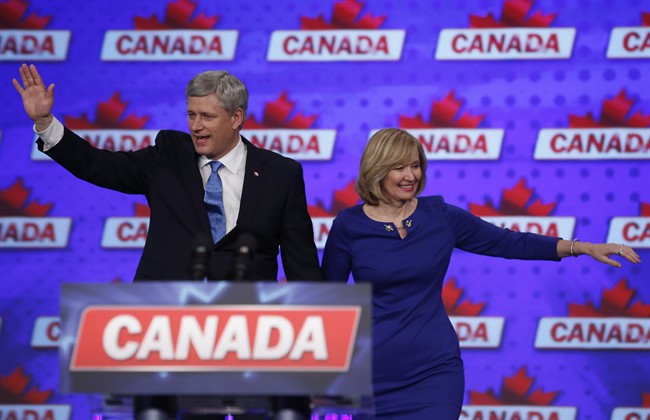 Conservative leader Stephen Harper along with his wife Laureen wave to supporters in Monday, Oct. 19, 2015 in Calgary. (THE CANADIAN PRESS/Jeff McIntosh)

CALGARY – Stephen Harper’s tenure as Canada’s sixth-longest serving prime minister came to an abrupt end Monday night as his party was reduced to opposition status and he prepared to step down as its chief.

Harper didn’t tell the hundreds of supporters gathered around him at the Calgary Convention Centre of his decision, instead using his final public remarks this campaign to celebrate the legacy of the party he built nearly from scratch a decade ago and will now have to rebuild anew.

“We put everything on the line. We gave everything we have to give and we have no regrets whatsoever,” he said.

“Friends, how could we? We remain citizens of the best country on Earth.”

The Conservatives headed into the election with 159 seats. With the new Parliament to hold 338 MPs, they needed to win 170 for a majority, but by early Tuesday morning were holding only 100 ridings. Cabinet ministers from across the country lost their seats including heavyweights such as Immigration Minister Chris Alexander and Finance Minister Joe Oliver.

“While tonight’s results is certainly not the one we had hoped for, the people are never wrong,” Harper said in an upbeat address, his family in the rows immediately around him.

His wife Laureen, who was by his side throughout the campaign, looked grim, keeping her eyes down.

The news he was stepping down was left to party president John Walsh to convey in a statement.

“I have spoken to Prime Minister Stephen Harper and he has instructed me to reach out to the newly elected parliamentary caucus to appoint an interim leader,” he said .

Harper is expected to stay on as an MP for his own riding of Calgary Heritage.

Walsh will also ask the party’s governing body to start the process of appointing a leadership organizing committee to set the ground rules for an impending race.

A policy convention had been scheduled for this May in Vancouver, and that will need to be postponed.

“The disappointment you also feel is my responsibility and mine alone,” Harper said in his speech.

“But know this for certain: when the next time comes, this party will offer Canadians a strong and clear alternative based on our conservative values.”

It wasn’t clear why Harper declined to speak about his intention to step down in his remarks. He is not expected to take questions from the press in the near future; campaign chair Guy Giorno would only say the leader had chosen to focus on other things — like the strength of the party he was leaving behind.

But Giorno said the party is now launching a review of why their carefully hatched plan to defeat the Liberals and the NDP failed so thoroughly.

“We have to do soul searching,” he said.

Monday night’s results were being described as a bloodbath by party loyalists, who watched in disbelief as Conservative stalwarts and rookies alike saw their seats stolen by Liberals, even in areas like British Columbia, where the party had thought their chief opponent was the NDP.

Some who survived the onslaught were Transport Minister Lisa Raitt, re-elected in Milton, Ont., and Veterans Affairs Minister Erin O’Toole, re-elected in the Ontario riding of Durham. His predecessor in the politically sensitive portfolio, Julian Fantino, was defeated.

Another bright spot for the party was in Quebec, where results showed they may take as many as 12 ridings, more than double their 2011 showing.

Long considered to be a front-runner in a race to replace Harper, Kenney deflected questions about his future Monday night — he was re-elected in his Calgary riding — but said the party need to rethink its approach.

“We need a conservatism that is sunnier and more optimistic than what we have sometimes conveyed,” Kenney said.

“We have to take collective responsibility for that.”

The Conservatives knew they were facing a tough election when Harper chose to start the clock in August, nearly a month earlier than anticipated.

But what the party wasn’t prepared for was a collapse of NDP support. They had been counting on NDP Leader Tom Mulcair to be more effective in countering the rise of Liberal Leader Justin Trudeau, but that failed and set in motion a Liberal tide that would drown Conservative hopes across the country.

The grousing about what happened and who should shoulder the blame has already begun.

“Two things happened: a bad campaign and Harper fatigue,” said one Conservative source, speaking on the condition of anonymity because they weren’t authorized by the party to comment publicly on the results.

Complaints ranged from local campaigns not getting the preparation and support they’ve received in past campaigns to a failure by the Conservatives to campaign more effectively on their record — as opposed to just attacking the Liberals.

Others said the change narrative being presented by the other parties was just too strong for Harper to beat back.

Supporters had begun filing into the Calgary Convention Centre a couple of hours before the results were clear and they were clearly disappointed.

“This doesn’t make me happy at all. I think there’s been a lot of smearing of Stephen Harper,” said Susan Garvey, who drove down from Red Deer, Alta.

“I am very upset. I think there’s been a lot of lies told about Stephen Harper and I don’t think Trudeau is anywhere near ready to run this country. I think Stephen Harper has done such an excellent job and I can’t fathom why anyone would not vote for him.”

Eighteen-year-old Tyler Van Vliet, a University of Calgary student who was carrying a “Harper for Canada” sign, said he wants Harper to stay on the job.

The Conservative leader did a lot of good things for Canada over the past decade, said Van Vliet.

“Unfortunately, people forgot that going into this election. There’s still those of us who appreciate what he’s done.”

— With files from Bill Graveland