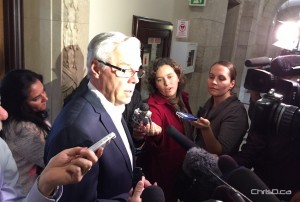 Manitoba Premier Greg Selinger speaks with the media outside his office on Tuesday, October 20, 2015. (CHRISD.CA)

The NDP leader thanked the outgoing Stephen Harper for his nearly decade of service to the country and to the Conservative Party.

Selinger made similarities between his government and the federal Liberals, drawing on the priorities of growing the economy, infrastructure, healthcare and reconciliation for indigenous people.

“We’re going to find we have a lot in common,” Selinger said. “We’d like to see them have a fuller commitment to universally-accessible child care. That is a big issue in this province for working families and middle class families.”

Trudeau, 43, became Liberal leader in 2013. His party steamrolled to a stunning majority win following the longest and most expensive general election in modern times.

Harper announced in a statement late Monday that he would step down from his leadership role, making way for a new leader to assume power of the official opposition in Ottawa.