Home » The Canadian Press » Trudeau Emerges as Political Force in Own Right, Out from Father’s Shadow

Trudeau Emerges as Political Force in Own Right, Out from Father’s Shadow 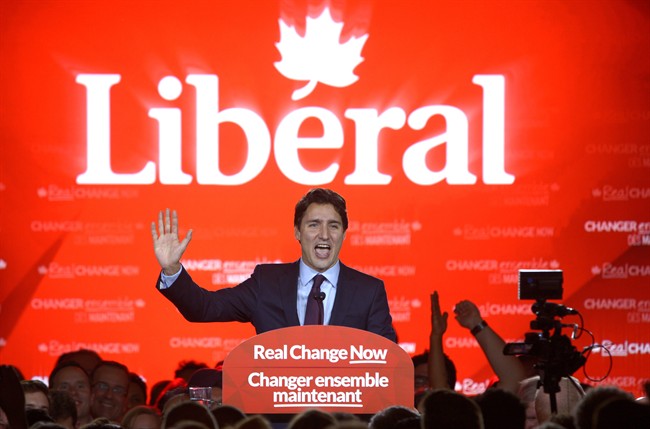 OTTAWA – It seems somehow fitting that the son of the man who first fired up political passion in Stephen Harper should be the person to usher him out of politics.

In besting Harper, Justin Trudeau has created Canada’s first national political dynasty, following in the footsteps of his late father, Pierre Trudeau, one of the country’s most revered — and reviled — prime ministers.

In the process, he’s scored another record for the history books, vaulting his party from a distant third place into first in a single election. And now he’ll be the first prime minister to return to the home where he grew up, 24 Sussex Drive.

No one ever likes to lose. But Harper is likely to find it particularly humiliating that he should meet his political end at the hands of a Liberal leader he’s held in barely concealed contempt as a privileged, empty-headed pretty boy. That he should be the eldest son of the man who represented everything Harper hates about liberalism must make it even more galling.

When Trudeau pere died 15 years ago, Harper, then head of the National Citizens’ Coalition, penned a snarky column about running into the “tired out, little old man” a year earlier, “a living legend who had provoked both the loves and hatreds of my political passion.”

He recounted how as a teenager in 1977 he had adored Pierre Trudeau, only to discover wisdom in later years as he watched Trudeau put the country on the road to perdition with “huge deficits, a mammoth national debt, high taxes, bloated bureaucracy, rising unemployment, record inflation, curtailed trade and declining competitiveness.”

“I think losing to Justin Trudeau will be a pretty bitter pill for Stephen Harper,” says Gerry Nicholls, who worked with Harper at the National Citizens’ Coalition.

“The Trudeau Liberals represent everything Stephen Harper went into politics to oppose.”

Moreover, Justin Trudeau has foiled Harper’s grand plan to annihilate the Liberal party, doing to Canada’s former natural governing party what the Romans did to Carthage: “razed the city to the ground and sowed salt in the fields so nothing would ever grow there again,” as Calgary political science professor Tom Flanagan once put it.

He almost succeeded. The Liberal party was left for dead after the 2011 election, reduced to a humbling 34 seats, surpassed even by the perennial losers, the NDP. And even though Trudeau’s famous name put the Liberals back in contention the moment he won the leadership in 2013, insiders knew one misstep on the campaign trail — particularly during the crucial leadership debates, as his opponents fully expected — would have sounded the death knell for the party.

Flanagan suspects former friend Harper will actually be philosophical about losing to Trudeau: it’s not, after all, as if he’s been beaten by someone “more strategic or smarter.”

“Justin just has such different attributes.”

Indeed, for all that his celebrity has boosted his political career, Trudeau’s attributes are much different than his father’s.

He’s made no secret that he’s not the towering intellect his father was. But he’s shown political smarts his father never had, says historian and former Liberal MP John English, Pierre Trudeau’s biographer.

As party president from 1979-80, English attended numerous rallies and events headlined by Trudeau senior. Yet he never actually met the man until years later because Trudeau, who hated the retail side of politics, never stuck around to meet his fans.

By contrast, English was amazed to see the younger Trudeau at a recent rally, hanging around afterwards shaking hands and taking selfies with anyone and everyone.

Whereas Pierre was “an introvert,” English says Justin is “gregarious … He just loves meeting people.” As a politician, Trudeau himself says he takes after his late grandfather, longtime MP Jimmy Sinclair, rather than his dad.

The elder Trudeau also had little time for the drudgery of party affairs. His son had no choice but to take an intimate interest in the mechanics of the party, rebuilding the decimated machine from the ground up, exorcising the ghosts of internecine feuds past, raising money, amassing a volunteer army, recruiting an impressive roster of candidates and putting together a coherent platform.

Still, the younger Trudeau “is very much in the tradition of his father” when it comes to his values, his love of the outdoors, his physical fitness, his theatricality and his willingness to take risks, English says. And he proudly carries the torch of his father’s legacy: the Charter of Rights and Freedoms, bilingualism and multiculturalism.

In his memoirs, Trudeau recounted his struggle to emerge from the long shadow cast by his father. But being the son of a man who’s been ranked as one of the top five Canadian prime ministers has obviously not hurt his political fortunes.

“Very clearly, Justin is there — and this isn’t diminishing him — he’s there because of his father,” says English.

That said, English believes Trudeau has emerged as a political force in his own right over the course of the marathon election, running a “flawless” campaign that has “stunning parallels” to the 1993 campaign that vaulted Jean Chretien into power: a underestimated but likeable leader exceeding low expectations, quelling qualms by emphasizing team and platform and offering hope for recession-battered voters with the promise of massive infrastructure investments.

Party insiders put Trudeau’s success down to four primary factors: the leader’s strong performance in the leaders’ debates; the decision to run modest deficits for three years, which allowed him to out-flank NDP Leader Tom Mulcair with pricey promises to stimulate the stagnant economy and give the middle class a tax cut; his steadfast refusal to respond in kind to nasty personal attacks by his opponents; and his appeal to Canadians’ better natures in response to Harper’s attempts to play to anti-Muslim sentiment.

Whatever the precise recipe for success, English believes there was a “transformation” in Trudeau at some point in the campaign, a point at which he became “more self-confident, far more comfortable and relaxed, more himself.” He exuded authenticity, sunny optimism and youthful energy, becoming in many ways the personification of the anti-Harper.

In his university classes, English says his students know little about Pierre Trudeau; they already judge his son on his own merits. Now that Justin Trudeau is prime minister himself, the historian suspects it won’t be long before others do the same, for better or worse.