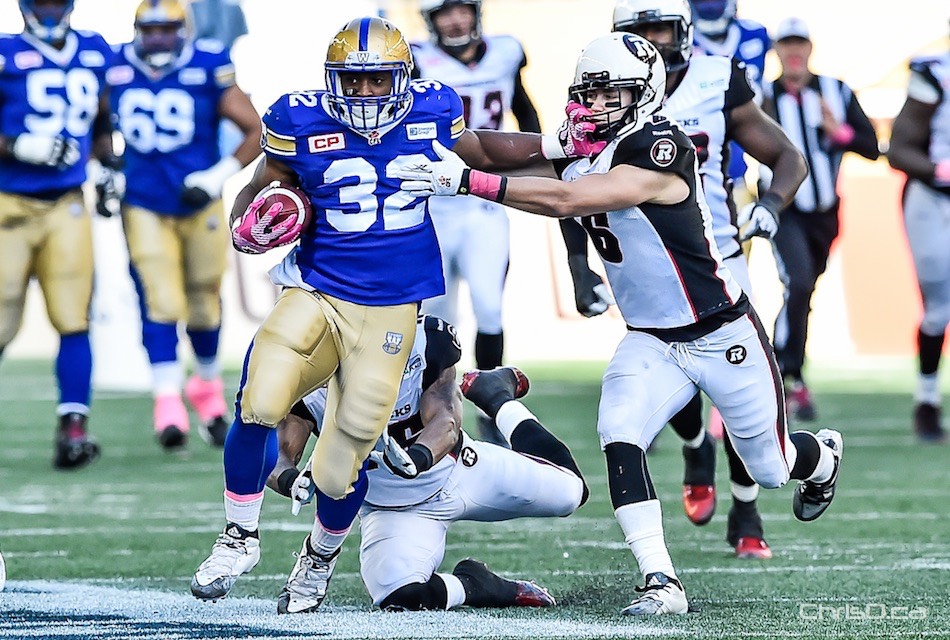 WINNIPEG — After having his knee taken out by Jamaal Westerman late in the first half, veteran Ottawa quarterback Henry Burris didn’t look quite himself. The low hit riled up his team, but slowed Burris down – right up until the last drive of the game.

Traveling 76 yards in 4:44, Burris finished off a game-winning drive with a leap into the end zone, giving Ottawa a 27-20 win over the Winnipeg Blue Bombers in front of 23,773 at Investors Group Field.

“We couldn’t stay on the field and couldn’t get off the field… come the end of the game, you’re looking at a defence and a special teams that are pretty tired,” said Bombers coach Mike O’Shea, later adding “In a game that you feel is a playoff game, a must-win situation, you’ve got to be able to muster up something.”

“When you give a guy like Henry Burris chances like that [last drive], you know, you just can’t. You can’t allow that stuff to happen,” said offensive lineman Patrick Neufeld.

Burris finished 29-for-43, passing for 413 yards and a touchdown. He was also part of a turnover festival in the first half, throwing two interceptions to join a William Powell fumble for three giveaways. Winnipeg had three turnovers in the first half as well, two coming on quarterback Matt Nichols throws to Redblacks corner Brandyn Thompson.

The loss drops the Bombers to 5-12 and, while not eliminating them from the playoffs, takes fate out of their hands. As they take a bye in Week 19, they’ll need both B.C. and Montreal to lose to keep hopes alive in Week 20. Ottawa, already having clinched a playoff spot, improves to 10-6.

“We live in a world of hope now,” said O’Shea. “It’s a tough place to be, we’ve got to wait and see what happens with other games this week. I have no doubt in mind that our guys are going to work hard and play this last game hard. Hopefully it’s a meaningful game.”

“It puts us in an extremely tough position of sitting here in the bye week and hoping [B.C. and Montreal] both lose so that the last week matters,” said Nichols. “It’s never a good position to be in, I’ve been in this league long enough to know that if you need teams to lose, it usually doesn’t happen for you.”

After the messy first half, both teams came out stronger after halftime. Winnipeg briefly took a 20-17 lead late in the third quarter, as Nichols found wideout Nick Moore on a nice bit of red zone play action.

Unfortunately, the good offensive moments were outshone by just 19 yards of rushing and seven sacks allowed on Nichols, many coming early in drives to swing time of possession in the Redblacks favour.

“They did a good job of getting some pressure and I took some hits but, you know as an offence… we want to put four strong quarters together and I felt like we had two pretty decent quarters and two not so great,” said Nichols, who had 282 yards and two touchdowns on 17-for-26 passing.

The three-point Bombers lead held until midway through the fourth when Ottawa kicker Chris Milo tied the game with a 46-yarder. That was soon followed by Burris engineering the game-winning drive.

Winnipeg’s final game of the season will be on the road against Toronto. Kick off is Friday, November 6 at 6:30 p.m.