By Adam Wazny, The Canadian Press 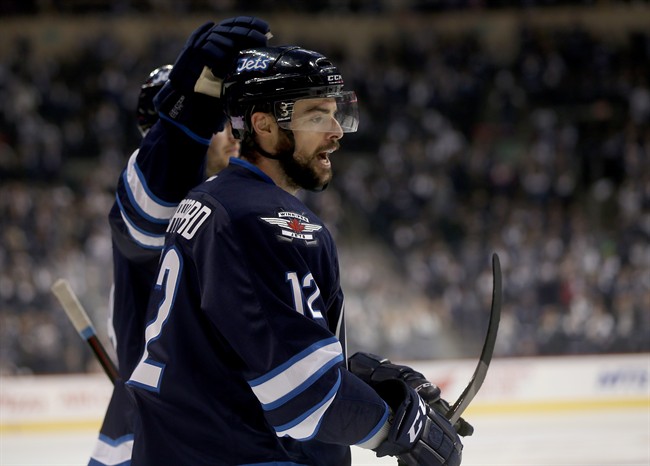 WINNIPEG – Drew Stafford’s starting to become one of his coach’s most relied upon players.

Stafford’s second goal of the second period turned out to be the difference as the Winnipeg Jets held off a late Minnesota comeback and beat the Wild 5-4 on Sunday.

Stafford snapped a shot from the top of the face-off circle past goaltender Darcy Kuemper 51 seconds into the second period for a three-goal lead. Kuemper was replaced by Devan Dubnyk, who saw Stafford add his second of the game at the 4:34 mark of the period to make it 5-1 Winnipeg.

The 29-year-old forward has a team-leading five goals this season and his play in the early part of the year is drawing praise from head coach Paul Maurice.

“Outstanding,” Maurice said when asked about Stafford’s contributions. “He’s found that (quality) that will make a player very, very valuable, a guy who has the ability to put pucks in the net, to play in that role.

“He hasn’t cheated anything for that (success).”

Andrew Ladd, Bryan Little and Nikolaj Ehlers had the other goals for the Jets (5-2-1). Ladd and Little each added an assist while Blake Wheeler had two helpers to extend his points streak to start a season to eight games, setting a new franchise record.

Stafford said while the win was good, Sunday’s game can be a lesson for the Jets. Winnipeg’s offensive attack is based on speed, and playing with the advantage of a four-goal lead can be tough to stay in the game mentally.

“When they slow the game down and take the life out of it, it’s hard as the team in the lead to keep that pace and keep your foot on the gas, especially when the score is that high,” Stafford said.

“We let them off the hook for a little bit and they were able to turn it around on us but at the same time, we were able to finish it off so it’s all good.”

Parise said the Wild just couldn’t match Winnipeg’s speed in the first 25 minutes of the game.

“It felt like they were coming at us a hundred miles-per hour through the neutral zone and we were flat-footed,” he said. “They did a good job of jumping (defencemen) into the rush, too, so it just put us on our heels.”

Kuemper allowed four goals on 18 shots. After Winnipeg made it 5-1 and chased him, Minnesota found some life on a power-play goal from Koivu and a Fontaine goal 38 seconds later. Parise made it a one-goal game midway through the third.

Dubnyk said despite being down 5-1 in the second, the Wild felt they had enough time to crawl back into the game and at least get a point.

“We’re just a group that does that,” he said. “We stay in every single game and we’re not willing to throw games away or give up on two points.”