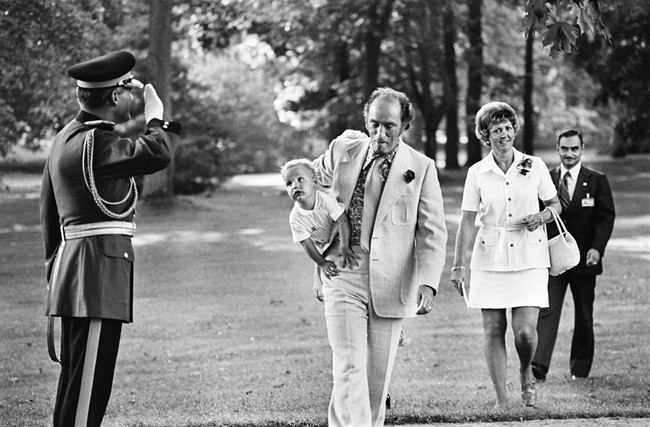 Pierre Trudeau is saluted by RCMP Officer as he carries son Justin to Rideau Hall in 1973 to attend an outdoor reception for visiting heads of the Commonwealth countries in Ottawa. In light of a five-decade career, Canadian Press reporter John Ward recounts one of his earliest assignments, where he witnessed one of Prime Minister-designate Justin Trudeau’s first encounters with the media. (THE CANADIAN PRESS/Peter Bregg)

OTTAWA – Note to readers: In a career spanning five decades, Canadian Press reporter John Ward has taken on myriad assignments across Canada and around the world. One of the earliest was covering the birth in Ottawa of Pierre and Margaret Trudeau’s son, Sacha. In so doing, he witnessed one of prime minister-designate Justin Trudeau’s first encounters with the media, which he describes below.

By John Ward, The Canadian Press

On an overcast Christmas afternoon in 1973, a handful of reporters and photographers huddled on the snowy pavement outside the front door of Ottawa’s Civic Hospital, waiting for the prime minister.

They were almost all young journalists. While their seniors savoured the warm oven aromas of Christmas turkeys at home, the juniors were dispatched for a brief photo op in the snow and cold.

Pierre Trudeau was en route to the hospital to visit wife Margaret and his newborn son, his second Christmas baby in two years.

The prime minister’s car pulled up and he stepped out, hoisted his first-born, two-year-old son in his arms and strode towards the door.

There was no deep phalanx of cameras, no boiling scrum waving microphones and shouting questions and no squad of grim security staff to clear the way, just a clutch of journalists, father, son and maybe a single, watchful Mountie.

The prime minister, a deceptively diminutive man who somehow always seemed taller than life, smiled as a couple of people in the group congratulated him.

He commented that it was a fine day, that mother and son were doing fine. He was not a man known for small talk, but he was clearly a happy man.

It was a quiet moment in a more innocent time, before journalists and politicians were automatic antagonists, when civility and deference still had a feeble grip on politics and press.

After a perfunctory chat and the obligatory photos, Trudeau moved up the steps. The dark-eyed toddler in his arms peered curiously over his father’s shoulder at the strangers and their cameras and notebooks. He smiled and raised a pudgy hand in a wave.

It was Justin Trudeau’s first comment to the media and was duly written down and sent out on the old-fashioned news wires. No selfies, no Twitter feeds, no Facebook comments, no Instagram, no live coverage, just a small item and a photo of a little boy on his birthday about to meet a new brother, Sacha.

In two weeks, that toddler, long grown to manhood, will assume his father’s mantle and become prime minister.

His dogged election campaign, with his appeals to “the better angels,” his calls for unity and his insistence that things can always be better, will likely be the definitive image for Canadians.

But for the handful who saw him that morning, there is another, indelible image of a brief, bright smile and a hesitant wave that will linger.