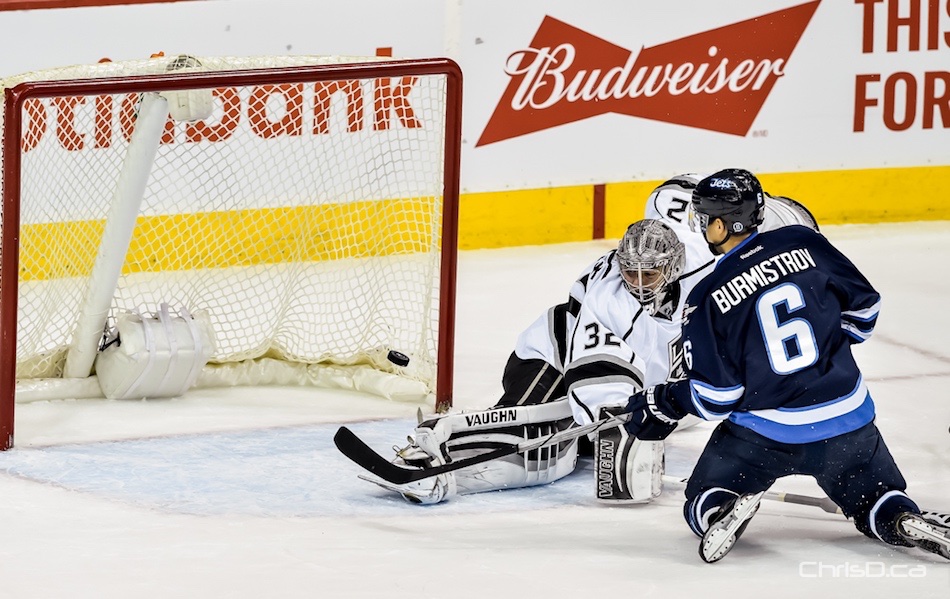 WINNIPEG – Milan Lucic could only smile when asked if he really scored the deciding goal in the Los Angeles Kings’ 4-1 victory over the Winnipeg Jets on Tuesday.

Centre Tyler Toffoli went down the side of the ice with the puck and looked about to shoot it, but instead sent it across the front of the net and Lucic was credited with redirecting it past goalie Ondrej Pavelec.

But it may have gone in off Jets defenceman Tyler Myers’ stick with 4:41 left in regulation time to give the Kings the 2-1 lead.

“Ahh, going to have to look at the video,” Lucic said of his second goal of the season. “I mean, if the video shows that it hit me, I’ll take it. But if it didn’t, it’s Tyler’s goal.

“But at the end of the day, you know regardless of who gets it, it’s a big goal at a big moment and the one that got us that win.”

The victory was the sixth straight for the Kings (6-3-0), who lost their first three games of the season before reeling off the half dozen victories.

Toffoli collected an empty-net goal at 19:06 and Trevor Lewis added another with 27 seconds left.

Defenceman Jake Muzzin also scored for the Kings and Drew Doughty and Jeff Carter each picked up a pair of assists.

“Just threw it there and I don’t know if it hit him or Myers coming back, but it’s a big goal in the game for us. It was a great finish for us.”

“I was getting the back check going and it just happened to go off my stick,” Myers said. “Unfortunate bounce, but you know that’s the way it went.”

Rookie forward Nikolaj Ehlers had the goal for Winnipeg (5-3-1).

“They came out hard, like every other team does in this league,” Ehlers said. “It was difficult out there today. They were trying to give us less room.”

Jonathan Quick, who has won his last five games, made 24 saves for the Kings. Pavelec stopped 28 of the 30 shots he faced for the Jets.

Winnipeg went on the game’s first power play with one minute left in the first period, but couldn’t break the scoreless contest.

Ehlers then accomplished that unassisted at even strength when he sent a shot from the top of the circle through traffic that beat Quick on the glove side at 8:45 of the second period.

It was the Danish rookie’s fourth goal of the season and seventh point in nine games.

Muzzin tied it 1-1 with a blast straight at a screened Pavelec from inside the blue line at 15:50 of the second. It was Lucic who provided the screen.

“It’s frustrating,” Pavelec said. “We played a really good game for two periods and we just stopped doing the right things in the third. They have a really good team, so they are winning all of their games like that.”

The Jets play their last game of a six-game homestand Thursday when they host Chicago. The Kings return home to face Nashville on Saturday.

Notes: Jets captain Andrew Ladd, 29, was playing in 700th NHL career game. He has amassed 187 goals and 426 points … Wheeler had his eight-game point streak end. It was a franchise record for the longest point streak to start a season.