Home » Columns » Behind the Wheel of the All New Ford Edge

Behind the Wheel of the All New Ford Edge 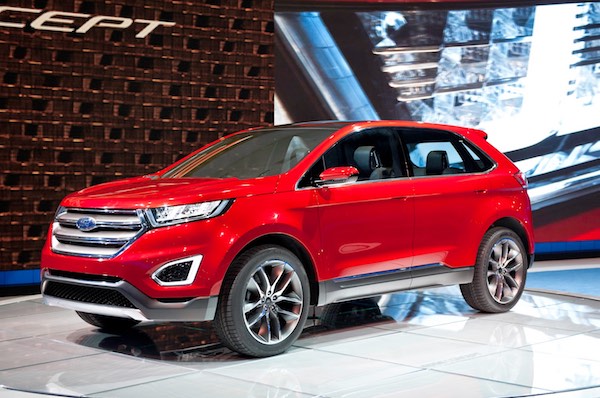 For the last week, Ford Canada has generously loaned me a fully-loaded 2015 Ford Edge to zoom around in.

The all-wheel drive SUV highlights the latest in the company’s smart technologies, including a surprising front camera system.

It’s the first time I had driven a vehicle that came equipped with a front camera. The first thought that popped into my head was, “why the heck would you need this?” That become clear later in the week after driving the Edge for a couple days.

The five-seater boasts plenty of leg room and is a step (or two) up from its smaller Ford Escape sibling. It’s a perfect family vehicle with plenty of storage for luggage, kids, animals, or a substantial amount of unnecessary IKEA purchases.

Getting back to the idea of an 180-degree front camera — it came in handy while trying to park the vehicle, in which seeing front of the hood proved to be a challenge.

Ford also speaks highly of its enhanced park assist system, enabling perpendicular and parallel parking, and the ability to pull the vehicle out of a parallel parking spot. For the sake of not risking an insurance claim, only manual parking and maneuvering was attempted on the test vehicle.

On the final day with the Edge, I took a spin out to Brunkild, Manitoba — roughly 30 minutes southwest of Winnipeg — for the community’s annual fall supper. Myself and guests packed comfortably in the vehicle with plenty of leg room to spare. With the tunes cranked and the full-length sunroof, the rural drive was a real treat. It also helped that it was a relatively mild fall day.

The backseat passengers also had the added benefit of being in the presence of Ford’s inflatable rear safety belts. The airbag technology reduces head, neck and chest injuries in frontal crashes for passengers in second-row seating. Luckily, those features weren’t “tested” on the day of the trip.

Overall, the Ford Edge is a wonderful large-size SUV for a family or even a couple who just wants the additional space for pure comfort and luxury. The Edge is also Canadian-made, with the model built at the newly-upgraded $700 million Oakville assembly plant in Ontario. Four-hundred new employees will help build the Edge for nearly all 100 global markets.

← Previous: CONTEST: Win Tickets to Gogol Bordello at The Burt Next: Dancers from 'The Next Step' in Winnipeg Dec. 6 →
Tags: