Home » Sports » A Good Start, But the Jets’ Grind Has Just Begun

A Good Start, But the Jets’ Grind Has Just Begun 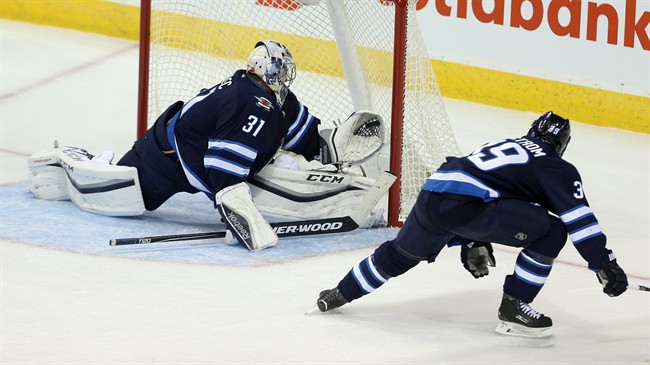 Winnipeg Jets’ goaltender Ondrej Pavelec (31) makes a tough glove save on a sharp angle shot late in the first period versus the St. Louis Blues’ with Toby Enstrom (39) in front of the net during NHL action in Winnipeg, Sunday, Oct. 18, 2015. (Trevor Hagan/The Canadian Press via AP)

And it’s those impressions that have Winnipeg Jets fans curious to see what happens next and anticipating more of the same.

The Jets have started well, there’s no doubt. Their 7-4-1 record through 12 games is among the league’s best. In fact, they’d occupy either the first or second spots in any other division.

But alas, the Jets play in the league’s toughest — the Central Division — where they sit in the fifth spot and where good records are merely met with a nod of acknowledgement.

But good is not great. The Jets are still very much a work in progress. Even if fans can forgive the Jets for pumping the breaks a little this past Sunday, a few glaring issues presented themselves for the public’s consumption.

Here are five thoughts as the Jets dive into the second month of the NHL season.

The Jets have 14 more goals at this point than they did last year at the same time. Instead of a minus nine-goal differential, they’re sitting on a healthy plus three.

It’s a big jump for a team that finished 16th last season in scoring. Contributing to the jump is Blake Wheeler’s hot start to the season. The American broke a franchise record late last month for consecutive games to start the season with a point. His eight-game point streak resulted in 11 points and after 12 games, Wheeler has 14 points – eight more than he had at this point last season.

It’s also worth noting that rookie Nikolaj Ehlers has four goals and nine points. And if it weren’t for a few posts and a crossbar, the Dancing Dane might already be running away with the rookie of the year nod.

Ehlers is fourth in rookie scoring and leads all rookies with 43 shots.

Including the Montreal game on Sunday, the Jets will play 10 of their 14 games in November away from MTS Centre.

As it stands now, this bodes well for the team who are 4-2-0 on the road this season. The Jets finished with a respectable 20-13-8 line last season in their travels and have continued that form to start the year.

The Jets will play twice back-to-back starting Wednesday in Toronto and then later in the month with tilts in Minnesota and Colorado.

Winnipeg’s goaltending has been good, but how long will it last?

It’s a nice reprieve for fans to see Ondrej Pavelec holding onto a good save percentage — .919 — rather than trying to claw back into one so far this season.

Similarly — outside of that pesky Montreal game — sophomore Michael Hutchinson has been clutch between the pipes with a .925 save percentage and a 4-1-0 record.

These two are going to have bad nights here and there, but it would certainly help if the Jets did a little more to stop all the rubber they’re seeing.

Winnipeg is giving up, on average, 32 shots a game, the fourth most in the NHL, trailing only Ottawa, Detroit and Philadelphia. Those 32 shots are roughly 3.5 more than they allowed last season.

More shots inevitably equate to more goals, and the Jets are allowing 2.75 of those per game – middle of the pack in the league.

Sunday’s game at the Bell Centre highlighted many mishaps defensively as the Jets failed to show up in Montreal.

The Jets are averaging three goals of their own each, but if the well dries up, trouble could be afoot.

Everything fans love about Dustin Byfuglien landed him in a little hot water this week via a phone hearing with the NHL’s disciplinary branch.

Byfuglien will have a fine Rock ‘Em Sock ‘Em video of his own when his career is done. And while he was let off with a warning this time – some reports suggest this latest one was his third this season alone – the big man is skating on thin ice when it comes to his rough and tumble style.

It’s unlikely Jets head coach Paul Maurice will ask Byfuglien to tone it down. He’s simply too effective when he’s ramming fear down opponents’ throats. But another infraction could land him with a game or two in the press box.

The Jets continue to be one of the most penalized teams in the NHL.

Winnipeg has been short handed 27 times now in 12 games, good for third most in the Show.

It continues to be a trend for a club who led the league in times shorthanded (308) and overall time shorthanded (521:46) last season.

Winnipeg’s penalty kill is operating at 84.8 per cent, good for ninth-best and even better for their chances on the scoreboard night in and night out.

On the flip side of the special team’s coin, the Jets own the eighth-best power-play unit, clipping along at 22.9 per cent.