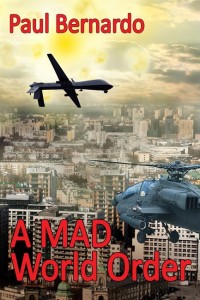 The cover of ebook “A MAD World Order” by Paul Bernardo is shown in this undated handout photo. Online sales giant Amazon has an ethical and moral responsibility to yank a self-published fictional ebook by notorious Canadian killer Paul Bernardo, the lawyer for his victims’ families said Friday. (THE CANADIAN PRESS/HO – Amazon)

“I would take Amazon to task — and I’m sure the families would, too — in giving a sadistic, sexual sadist and psychopath this kind of platform,” Danson told The Canadian Press. “They’ve got lots of other things to do to make money.”

According to the blurb on Amazon, the 631-page “A Mad World Order” involves a plot by a “secret cabal” to return Russia to a world power, ensnaring a man in machinations that involve the Russian Mafia and al-Qaida.

While Bernardo, formerly of St. Catharines, Ont., does enjoy constitutional free-speech protections, Ontario law prohibits criminals from profiting from their crimes — in his case the first-degree murders of Leslie Mahaffy, 14, and Kristen French, 15, in the early 1990s.

As a result, Danson said he would reluctantly be reviewing the novel to see whether it has anything to do with Bernardo’s hideous videotaped rapes and murders, offences for which he was declared a dangerous offender.

“I’d want to satisfy myself on behalf of the (victims’) families that he hasn’t disguised his crimes through fiction, because that would be an indirect way of doing what he can’t do directly,” Danson said.

The Canadian Press has not been able to confirm Bernardo is the author of the book, but his lawyer told Global TV he was aware his client was writing a book.

Neither Amazon nor Bernardo’s lawyer responded to repeated requests for comment.

Correctional Service of Canada said while the e-book may be offensive, it was fictional and did not relate Bernardo’s “specific” crimes.

In addition, a spokeswoman noted that federal inmates have access to computers but no access to the Internet or email — so it’s not clear how Bernardo managed to get the book published.

“They are able to communicate with members of the public in writing and are entitled to privileged correspondence with their legal counsel,” Denise Allore said in an email.

A growing chorus of condemnation erupted on Amazon’s website, with commenters calling on the company to pull the book and threatening a boycott.

“I am totally disgusted that Amazon would sell a book by a convicted killer,” one person posted. “I am no longer going to purchase anything on your site. You should be ashamed of yourselves.”

Another wrote: “Does anyone work for Amazon old enough to remember the horror of what he and his then-wife did? I remember the total state of disbelief most Canadians felt over what this perverted psycho did.”

Danson said the book — depending on its contents — could play a role at Bernardo’s parole hearing scheduled for next spring. It would be relevant if the same patterns of violence and psychopathy are in play in the narrative as when Bernardo killed his victims with the help of his then-wife, Karla Homolka, who divorced him and served 12 years in prison for her role in the crimes.

“That would be a matter that should be of great concern to the parole board,” said Danson, who stressed he had not read the publication.

Danson said he had not yet spoken to his longtime clients about the book but said there is little doubt it would be “very hurtful” to them.

In the interim, the lawyer said, Bernardo is probably thriving on the attention and notoriety.

“It’s all entertainment for him,” he said.