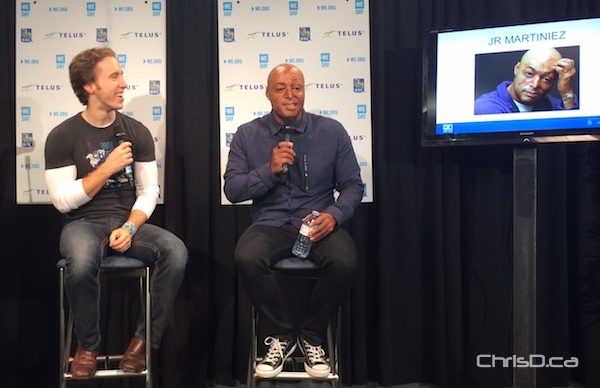 WINNIPEG — Over 16,000 Manitoba students and educators from as far north as Churchill celebrated We Day at MTS Centre on Monday.

Pumping their fists in the air and loudly parroting words of inspiration, speakers and performers encouraged them to continue making a difference in their communities.

Students can’t just purchase a ticket to attend We Day. They have to earn it through the We Schools program by participating in one local and one global action.

We Day co-founders Craig and Marc Kielburger helped kick things off, followed by stories of courage, teamwork, combating adversity and reaching out to those in need.

From former U.S. Army soldier J.R. Martinez, who was severely burned during battle, to Oscar-winning and hearing impaired actress Marlee Matlin, attendees were treated to energetic speeches and motivational music.

“29 years ago, I decided to accept the challenge critics put in front of me,” said Matlin. “If I didn’t have focus and courage to chase my dreams, I never would have triumphed.”

Matlin then had all “32,000 hands” sign the phrase “courage plus dreams equals success.”

Canadian singer/songwriter Francesco Yates performed his song “Call.” The 20-year-old Torontonian has teamed up with the Telus #CallforChange campaign to use a version of his song and video to challenge youth across the country to accept the call and make a difference.

“Music opens up a certain part of the brain that makes you want to take it all in,” Yates said. “If you put positive messages in the music that can seep in and encourage others to take steps and make changes for the better, it’s a very good feeling.”

Even “The Fonz” from the TV show “Happy Days” made an enthusiastic appearance. While Henry Winkler is best known as an actor, he has also authored 31 children’s books that deal with learning disabilities. Winkler himself is dyslexic.

For 14-year-old Erica Ritter, who is attending her fourth We Day event, she enjoys coming together with her peers to “get excited about what young people can do to change the world.”

“My goal is to continue volunteering and encouraging others to do their part.”

For Craig Kielburger, every We Day event is meant to celebrate the good in the world.

“Today’s event is unique in that it follows the tragic attacks that occurred in Paris on Friday, but if anything, We Day can serve as a reminder that we really need to focus on how to make things better.”