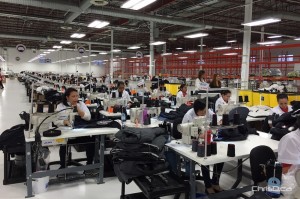 WINNIPEG — Canada Goose is doubling its imprint on the local economy by opening up a second manufacturing facility.

The Mountain Avenue factory will help the Toronto-based company with a more aggressive rollout globally.

About 80 employees work in the new factory, which opened last month. President and CEO Dani Reiss says the company will nearly double its staff by the end of March, with the goal of having 364 people working there by March 31, 2017.

The winter outerwear company is hiring its workers through a partnership with the Manitoba government, which has helped support the training of employees.

“This training will help keep the skills, the expertise and the know-how to create the best cold weather jackets, right here in Winnipeg,” said Jobs and the Economy Minister Kevin Chief.

“Canada Goose is taking the world by storm but its biggest impact is creating good jobs for local people to earn a living for themselves and their families.”