Home » Entertainment » Only the Best Beards at Festival du Voyageur

Only the Best Beards at Festival du Voyageur 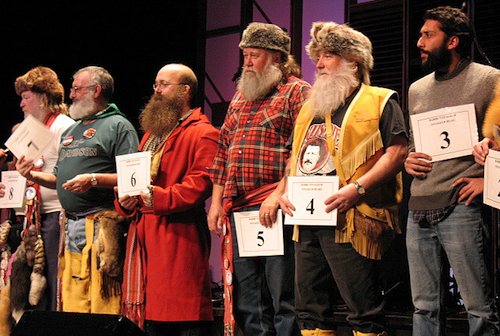 Participants in the Festival du Voyageur’s 2010 Beard Growing Contest take part in the final round of judging at the Franco-Manitoban Cultural Centre. (JENNAMIDGET / FLICKR)

First comes Movember, and then Decembeard?

The Festival du Voyageur is calling on men everywhere to compete in its 34th annual Beard Growing Contest on February 19, 2016.

It’s your chance to show off the best facial hair you can grow while at the same time supporting the Heart and Stroke Foundation during the 10-week campaign.

Registration is $35 and each participant will receive a souvenir package, including the official event T-shirt and a 10-day pass for the Festival du Voyageur.

For the first time this year, organizers are asking men to arrive to the event with their beards. Berns and Black will be on hand to provide a clean shave.