The eyes of the CFL, and particularly Edmonton and Ottawa, will be on Winnipeg this week as Grey Cup events city-wide prepare to get underway.

Around 10,000 people are expected to come from out of town to attend the big game on Sunday. The Winnipeg Blue Bombers have so far sold about 35,000 tickets, but many still remain available through Ticketmaster.

Leading up to the game itself, more than 25 events have been planned throughout the city.

Here’s a handful of events you should know about:

The 103rd Grey Cup Festival begins on Wednesday with the arrival of the league’s championship trophy to the Manitoba Legislative Building. The cup will arrive at 3 p.m.

The fun continues Thursday with the kick off of the sold out Blue Bomber Breakfast at the Metropolitan Entertainment Centre at 7:30 a.m. The city’s business community will be treated to a keynote speaker for the two-hour affair.

The RBC Convention Centre will be the hub for Grey Cup Festival headquarters beginning Thursday. Fans can take in both free and ticketed concerts and events, buy team merchandise and mingle with other CFL fans.

Several hotels and bars in the city are also hosting their own parties surrounding specific teams on Friday:

This year’s Winnipeg Santa Claus Parade has been merged with the Grey Cup parade on Saturday. Floats will make their way down Portage Avenue accompanied by cheer teams, nearby block parties and a mix of football-meets-Christmas to create one giant downtown party.

Following the parade, which begins at 4:30 p.m., the Nissan Titan Street Festival at the University of Winnipeg will include the Manitoban Parka Party, featuring music, games, and family fun activities.

On Sunday — the day of the big game itself — the Blue Bomber House Brunch at the Shark Club will get fans amped up. Tickets are $29 and include round trip bus transportation to the stadium, a Shark Burger with fries, and a bottle of Bud Light. The brunch begins at 11 a.m. and buses depart for Investors Group Field at 2:30 p.m.

A Fan March will leave from the RBC Convention Centre at noon and wind its way through the streets of Winnipeg with the Grey Cup. Buses will take fans to the stadium from The Forks at 3 p.m.

The University of Manitoba’s Max Bell Field House will play host to the Monsanto VIP Indoor Tailgate Party between 2-5 p.m. Tickets are $100 and include a buffet meal, DJs and an all around good pre-game party. A post-game party will go down in the same location between 8-11 p.m. Tickets are $25.

Winnipeg Transit will be operating additional buses to get fans to and from Investors Group Field on Sunday.

Fans can get a free ride by showing their Grey Cup game ticket.

Getting to the stadium:

Getting from the stadium:

After the game, all buses on routes 75, 78 and 160 will be lined up on Chancellor Matheson heading west towards Pembina. There will be no charge to passengers post-game for these routes.

Route 170 can be caught at its regular stop, University Crescent at Freedman.

Several park & ride and shuttle services will also be operating on game day. The complete transportation plan is available at BlueBombers.com. 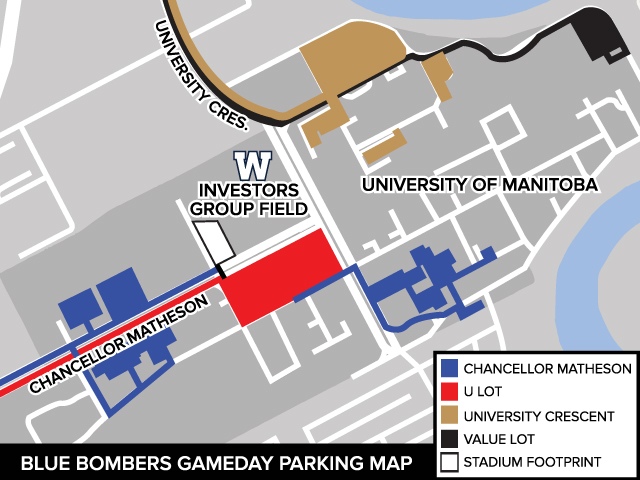 The Ottawa Redblacks and Edmonton Eskimos meet at 5 p.m. CT for the 103rd Grey Cup. Edmonton beat last year’s Grey Cup winners, the Calgary Stampeders, 45-31 in the West final while the Redblacks downed Hamilton 35-28 in the East. The last time Edmonton faced an Ottawa-based team in the Grey Cup was in 1981, when the Eskimos beat the Rough Riders 26-23.