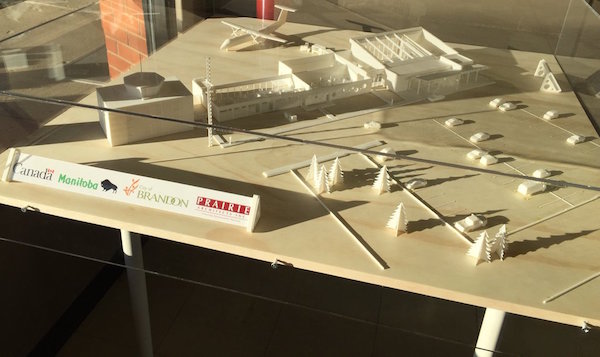 A model showing the future expansion of the Brandon Municipal Airport. (CITY OF BRANDON / TWITTER)

Brandon’s Municipal Airport will see a welcomed expansion after all three levels of government committed funding for the project on Monday.

The passenger terminal will be expanded to three times its current size, meant for improved passenger flow and the ability to handle future growth needs.

Baggage processing capacities will also be increased, while an investment to the airport’s information technology infrastructure will see the installation of fibre optic cable.

“I don’t think there is a single person flying in and out of the Brandon Municipal Airport who isn’t looking forward to the day when we can throw the doors open on an expanded terminal building, complete with the space, amenities, and comforts of a modern airport,” said Brandon Mayor Rick Chrest.

“Once complete, our improved airport terminal building will better serve passengers of our daily flights to and from Calgary, and will auger well for the additional air service options in the future.”

The federal and provincial governments are contributing $2.9 million each towards the project, while the city’s share is $8.79 million. Construction is expected to be complete by the end of 2016.