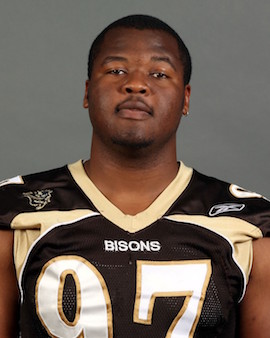 Onyemata was named the Outstanding Down Lineman of the Year in the CIS during an awards ceremony on Thursday.

Onyemata is the first Bisons player to be selected for the J.P. Metras honour since NFL star Israel “Izzy” Idonije earned the award in 2002.

“David Onyemata winning the J.P. Metras is one of the great individual accomplishment over the many years of CIS national football awards,” said Bison football head coach Brian Dobie.

“He came into this program as raw as possible but with tremendous potential. It says everything about David’s character, perseverance and commitment to excellence that he would continually move forward through the last five years with the Bisons to achieve this tremendous accomplishment.”

Onyemata impressed CFL scouts earlier in the season, ranking high in the league’s initial draft rankings released in September, placing at number two on the list.