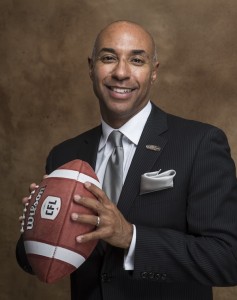 WINNIPEG – Commissioner Jeffrey Orridge continues to put his stamp on the CFL.

Orridge unveiled a new logo, slogan and marketing campaign for the league Friday at his first Grey Cup state-of-the-league address. The new logo consists of the block letters “CFL” over a small maple leaf on a silver, football-shaped background with its new slogan, “What we’re made of.”

Orridge’s presentation also included a 90-second video that will run during the television broadcast of Sunday’s game between the Ottawa Redblacks and the Edmonton Eskimos at Investors Group Field. The move is aimed at attracting a younger demographic.

“Our great fans will be the first to tell you: we need more fans and in particular, we need to attract the next generation of fans so this league is strong for years to come,” Orridge told reporters. “The time has come to update and transform how we present ourselves. 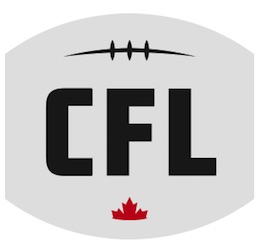 “We’re not asking our new fans or casual fans to join our already avid fans in the stands just because somehow it’s their duty as Canadians. We’re inviting them to join us because the product and the experience are fun, exciting, accessible and authentic. We are showcasing who and what we are today and we’re looking to build for the future.”

Since being hired in March, Orridge has said attracting younger fans is a top priority. In May, the CFL partnered with Whistle Sports, a multi-channel digital network with millions of subscribers on various platforms including YouTube and Facebook.

These days, the CFL is on solid economic footing, thanks in large part to a lucrative, long-term TV deal with TSN. But attracting the next generation of fans remains very important. Orridge said league attendance remained stagnant this year with reports TV ratings dipped 15 per cent.

“While the league has come a long way . . . it would be foolish and even irresponsible for us to ignore these rapidly changing landscapes and challenges,” Orridge said. “We also have a lot of momentum with new stadiums in place and more on the way, some great, new young stars on the field, emerging technologies and the social dynamic that allows us to reach new fans in new ways and we need to capitalize on that.”

One team that struggled at the turnstiles this season was the Toronto Argonauts, who played four scheduled home games outside the GTA due to the Pan Am Games and scheduling issues at Rogers Centre. But next season, the Argos — who posted a 10-8 record to make the East Division playoffs —will be under new ownership (MLSE chairman Larry Tanenbaum and Bell) and play at a refurbished BMO Field.

“We can’t assume these two things will automatically ensure the Argos, who’ve been strong for years now on the field, will be just as strong in business,” Orridge said. “However there is tremendous potential for a new era for the Argos, and a new era we plan to mark with a tremendous Grey Cup in 2016 in Toronto.”

The changes helped create an eight per cent boost in scoring (44.5 points per game this year compared to 37.7 in 2014) while shaving three minutes off the average length of games (two hours, 52 minutes).

One-point converts dipped to 85.5 per cent from 99.5 per cent while two-point attempts were successful 65.9 per cent of the time. But there was also a nine per cent spike in penalties that resulted in continued criticism of CFL officials, which Orridge felt was wrong.

“I wish everyone who watches our game was just as quick to acknowledge when a good call is made and when a good game is officiated,” he said. “Overall our officials do a really difficult job very very well but I say to them . . . our best can always get better and we’ll always work to get better.”

Orridge said the league is always looking at improving itself and left the door open to the possibility of hiring American officials.

The CFL’s most pressing issue was the health of its starting quarterbacks as seven-of-nine teams lost their starter and/or backup for significant portions of the season. Ottawa’s Henry Burris, the league’s outstanding player and oldest quarterback at age 40, was the only one to start all 18 regular-season games although Calgary’s Bo Levi Mitchell made 17 straight starts before being rested in the Stampeders’ regular-season finale.

“Injuries are part of any sport,” Orridge said. “But the truth is this affected teams’ ability to perform at their best and so it did affect our product.

“I plan to sit down with our teams, our football leaders, in the off-season and really examine this issue.”