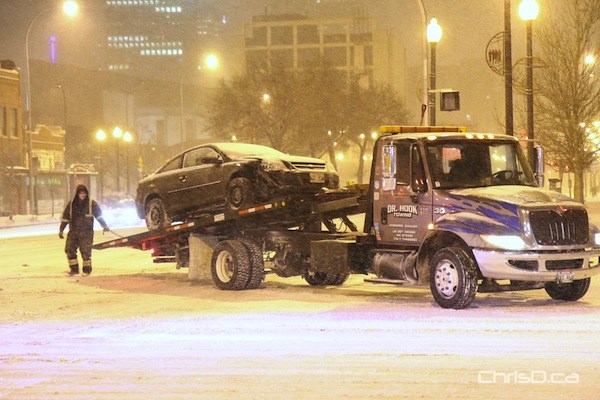 A single-vehicle crash is cleared from Main Street and Logan Avenue in this file photo. (HOWARD WONG / CHRISD.CA)

A surge in the number of fatal vehicle accidents in the province has Manitoba Public Insurance “disturbed” by recent data.

The public auto insurer says there’s been a 42 percent increase in road fatalities over the last three months compared to data in the previous five years.

“Of significant concern is the fact that nearly 50 percent of this year’s fatalities have occurred in the last three months,” said Ward Keith with MPI. “Sadly, many of these fatalities have involved not using seatbelts, head-on collisions and driver inattention.

The claims data was collected from September 1, which accounted for 34 people killed in vehicle collisions, compared to an average of 24 fatalities in previous years.

So far this year, 71 people have been killed on Manitoba’s roads — more than the total number of fatalities in 2014.

MPI cautions motorists to give themselves more time to arrive at destinations, drive cautiously, be patient, and drive in a courteous manner.

“We want everyone to arrive home safely to their families and friends and these simple reminders can make a huge difference.”