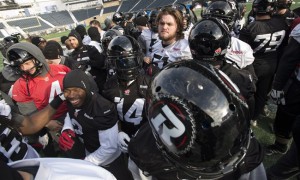 Members the Ottawa Redblacks huddle following a team practice in Winnipeg, Man., Wednesday, Nov. 25, 2015. The Redblacks will play the Edmonton Eskimos in the 103rd Grey Cup on Sunday. (THE CANADIAN PRESS/Jonathan Hayward)

When two parades are merged into one giant parade, you know it’s time for a party.

The celebration is a lead up to the big game on Sunday between the Ottawa Redblacks and Edmonton Eskimos at Investors Group Field.

But before the Grey Cup is held, more than 50,000 people are expected to attend the parade and Grey Cup-related festival events. That doesn’t include the estimated 30,000 households expected to watch the parade live on Shaw TV. 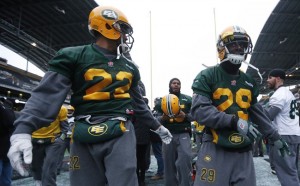 Besides the usual block parties along the Portage Avenue parade route, Grey Cup Festival organizers have their own festivities planned, including representation from all nine CFL teams.

Volunteers from the Christmas Cheer Board will be picking up items along the parade route. Those wishing to donate should bring a non-perishable food item or new unwrapped gifts to the parade.

More than 2,000 participants are accompanying the 106 parade entries, with help from some 800 volunteers. The parade begins at 4:30 p.m.

Special shuttles are running all week along between 10 a.m. and 11:30 p.m. See the maps outlined below for further information or visit WinnipegSantaParade.com.