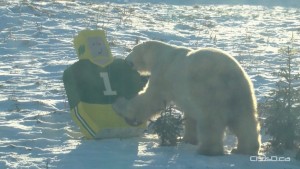 Storm the polar bear predicts the Edmonton Eskimos to win the 103rd Grey Cup during an event at Assiniboine Park Zoo on Saturday, November 28, 2015. (CHRISD.CA)

If you had the Ottawa Redblacks pegged to win Sunday’s Grey Cup, we hate to be the bearer of bad news.

Storm the polar bear at Winnipeg’s Assiniboine Park Zoo has predicted the Edmonton Eskimos to win the big game. And that’s as official as you can get.

A group of bears were released into an area near the Tundra Grill restaurant Saturday morning to choose the winner. The five-year-old bear approached a cutout of an Eskimos player first and made his determination.

The Redblacks’ cardboard figurine suffered a similar fate moments later, so it may be a toss up.

Regardless of the real winner, the bears roamed for about 30 minutes and munched on veggies and fruit put out by zoo staff.

The event was part of Touchdown at the Zoo, where all ages football-themed activities are taking place until Sunday.

The Ottawa Redblacks and Edmonton Eskimos face off in the 103rd Grey Cup Sunday at Investors Group Field.