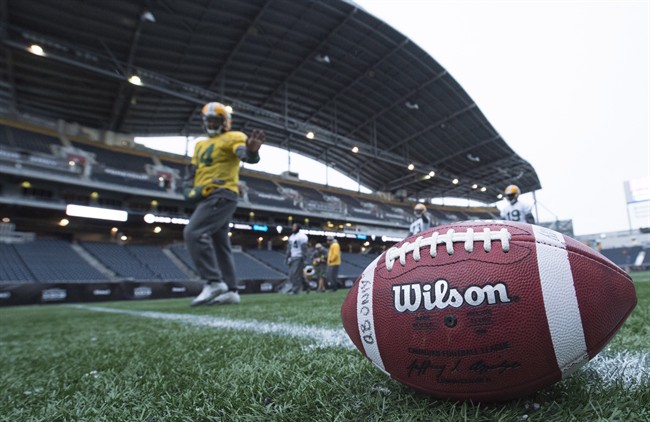 Edmonton Eskimos players warm up during a team practice in Winnipeg, Man. Wednesday, Nov.25, 2015. The Grey Cup, like many of the viewing parties around it, will be largely BYOB. The Edmonton Eskimos and Ottawa Redblacks will be bringing their own balls to the 103rd edition of the CFL championship game Sunday. (THE CANADIAN PRESS/Nathan Denette) 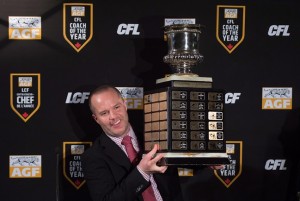 Ottawa Redblacks head coach Rick Campbell poses for photographs after being named coach of the year during the Canadian Football League awards in Winnipeg on Thursday November 26, 2015. (THE CANADIAN PRESS/Jonathan Hayward)

My football-loving history stretches back to playing the game with my siblings on our farm in Marquette, Manitoba. There were enough of us to make two teams, so we’d play often. We also watched football on TV, and, after moving to Winnipeg, we’d go to Bomber games whenever we could. To us, the Grey Cup was an annual event to look forward to, and a good excuse to have a party.

I remember the frenzied excitement at Portage and Main when the Winnipeg Blue Bombers won it in 1984. What a great day that was! Then in 2006, when the Grey Cup was hosted by Winnipeg for the first time, I was fortunate to work from the sidelines as part of the PR team, and gain an entirely different perspective on the action.

Many Canadians attend Grey Cup each year, and will continue the tradition on November 29th in Winnipeg for the 103rd championship. There are lots of activities going on in our city, so here are some tips for making the most of the Grey Up experience — gathered straight from those who have taken in the festivities themselves in previous years. 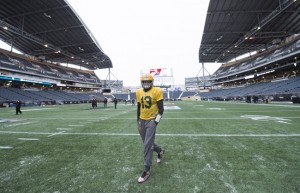 Edmonton Eskimos quarterback Mike Reilly walks off the field following a team practice session in Winnipeg on Wednesday, Nov. 25, 2015. The Eskimos will play the Ottawa Redblacks in the 103rd Grey Cup Sunday. (THE CANADIAN PRESS/Nathan Denette)

Be prepared. Some of the events require tickets, so purchase in advance. Watch the festival website and map out your schedule. Know where you want to be, and figure out how to get there. Plan to take transit or car pool, especially if you’ll be having some drinks.

Be spontaneous. Make your plan, then remain loose enough to change it on the fly should you choose to do something totally different. Allow time to wander around and find unexpected things to do. Read programs and schedules. Take a day pack and be ready to go from party to party. Throw in an extra layer, just in case you find yourself outside for extended periods of time. Which can very well happen.

Be colourful. Wear your colours loudly and proudly, everywhere, every day. You’ll see lots of elaborate costumes, so pose for pictures with people who have gone all out. Have your own ‘best dressed’ contest among your group of friends and issue silly prizes.

Be in the midst. Go to as many official events as you can fit in – even the ones hosted by teams you don’t like. There are lots of parties so check them all out, no matter which colours you are wearing. Melons on your head not required. Unless you’re from you-know-where.

Be social. Take plenty of pictures to share on social media. Use hash-tags with your posts. Follow the feeds, and find out what’s trending. Keep on top of what’s happening, just in case there’s something else going on that you want to be part of. Stay connected.

Be patient. And friendly. There are lots of lineups, so have fun with the other folks while waiting. Talk to strangers and make new friends. Take selfies. Be a fan among fans and share your passion for the game. You’re all in it together.

Be a sports nut. Talk about football, any football — CFL, NFL, Vanier Cup, high school, even your kid’s little league team. Go to the CFL player awards and celebrate athletic achievement. Meet and mingle with current heroes and historic legends. Like them on Facebook and follow them on Twitter. Stalk them in person. Collect autographs. Get weird things signed. Like that melon you woke up with on your head.

Be a trader. Bring city and provincial pins, stickers and souvenirs, hometown t-shirts and schwag, and share the love. Bartering with others is fun, and the collection you amass can result in great keepsakes.

Be wise and pace yourself. Get lots of rest, and sleep in when possible. Consume lots of water. Allow extra time to get to the stadium early on game day. Be careful not to drink too much before it starts and end up missing the big game, because it apparently does happen. So make sure you don’t add your name to this ill-lustrious list.