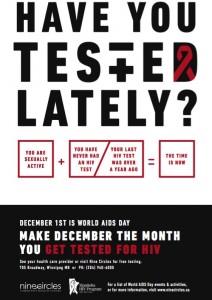 It’s World AIDS Day across the globe and local health organizations are encouraging Manitobans to get themselves tested.

Data from the Public Health Agency of Canada estimates more than 17,000 Canadians are infected with HIV and don’t know it.

“Testing rates are low in Manitoba and across Canada,” said Nine Circles executive director Mike Payne, one of the organizations holding testing clinics.

“We would like to see testing become more routine, because after someone is infected with HIV, the sooner they find out their status, the sooner they are able to connect with care and start treatment. Increased testing is also key to prevention. Research has suggested that the majority of HIV transmissions occur when someone doesn’t know their status.”

The Manitoba HIV Program is also behind the move to get more people tested for the disease.

“The Manitoba HIV Program promotes routine testing directly to the public and encourages health practitioners to offer HIV tests to their clients in a safe and non-judgmental way.”

Two types of tests exist for HIV: a typical lab test like a regular blood test, where blood is drawn from the arm. The other is a point of care test (POCT), which pricks the patient’s finger for a blood sample. The blood is diluted and mixed with other solutions to detect HIV antibodies within a minute. If a test is reactive, a lab test will be ordered for confirmation.

Testing is free through Nine Circles Community Health Centre, 705 Broadway, or through your doctor.