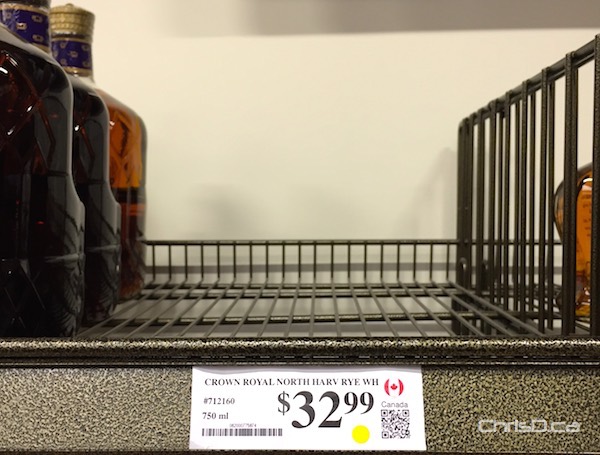 WINNIPEG — It appears when you become a whisky that is rated number one by the Whisky Bible you are suddenly the hardest thing to covet during the holiday season since Tickle Me Elmo.

Crown Royal Northern Harvest Rye, produced by Diaego Canada at its distillery in Gimli is not just flying off of the shelves in liquor store locations throughout Manitoba, staff can barely get it out of the case fast enough before people snap it up because it has become such a hot commodity.

Andrea Kowal, spokesperson for Manitoba Liquor and Lotteries, says every time they get inventory of the in-demand product, it sells out in a heartbeat.

“When the review by the Whisky Bible came out, we saw 1,600 bottles fly out the door in one weekend,” Kowal said.

Whisky authority Jim Murray, who tasted over 1,000 new whiskies before making his announcement, said “This year, doubtless there will be many more eyebrows raised because rarely is Canada mentioned when it come to the world’s top whiskies. But, again, I have no doubt people finding the bottling I tasted will be blown away with this whisky’s uncompromising and unique beauty. It certainly puts the rye into Canadian rye.”

It is the first time a Canadian whisky has won the top prize in the Whisky Bible.

Kowal said they received another shipment of 600 cases, but those sold out fast and they are now awaiting another 600 cases, possibly in time for this upcoming weekend. She suggests people go to the corporate website at MBLL.ca or contact a Liquor Mart location to find out where their stock is at.

When asked if the corporation would put the product on hold or limit the number of bottles of the much sought after golden liquid that is made from a mash of 90% rye (which is what makes it so special), Kowal stated “we are not allowing any holds on this product in our Liquor Marts. It is being sold on a first-come, first-served basis. We are also not imposing any limits on how much a customer can purchase.”

This new jewel for Crown Royal is not just a rising star in the Manitoba market. There have been reports of people in Ontario so desperate for the spirit, they are driving to Quebec if they hear there may be a bottle of Northern Harvest Rye, or maybe even two, still available.

Somewhat ironic is that even watering holes in Gimli can’t get their hands on the stuff.

The owner of the Ship and Plough Gastropub, Scott Carman, said, “I have to yet to stock it or even try it for that matter, but I am anxious to offer it. Customers have been asking for the Northern Harvest and it’s kind of funny that we are a stones throw away from the plant that is producing it and we still can’t get any!” he chuckled.