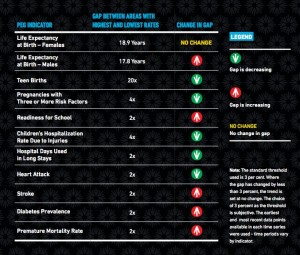 A new Peg report shows the health equity of those living in a higher income bracket compared to those in the lowest. Click graphic to enlarge.

A new Peg report says those in the highest income bracket can live nearly 20 years longer than those in the lowest.

The dramatic findings are part of a report released Tuesday on health equity in Winnipeg.

“Disadvantage profoundly limits opportunities to be healthy. This is about much more than individual health choices,” said Dr. Sande Harlos, medical officer of health with the Winnipeg Regional Health Authority.

The United Way of Winnipeg says it’s concerning to see such significant health inequity in Winnipeg, which in some cases, is growing.

The report, which was developed with the WRHA, can be read below: