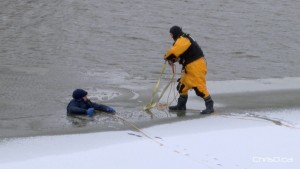 Winnipeg firefighters carry out a rescue exercise on the Red River, Thursday, December 10, 2015 to show the dangers of thin ice on waterways this time of year. (CHRISD.CA)

WINNIPEG — With the unseasonably warm weather trend continuing for much of Manitoba, emergency personnel can’t stress enough for the public to stay away from waterways.

A safety demonstration held Thursday underscored that message on the Red River behind the Winnipeg Rowing Club. The Winnipeg Fire Paramedic Service held a rescue exercise to show the dangers of thin ice and how quickly someone can find themselves in trouble.

“All water and ice rescue calls carry a degree of risk for our members,” said WFPS Chief John Lane.

“These are preventable incidents with sometimes tragic consequences. Areas of the river that appear calm can carry dangerous currents, and ice thickness is unpredictable at this time of year, so there really is no reason to be near the water.”

The river’s current is another concern, with sections of the Assiniboine River rarely freezing until mid to late January due to the constant flow underneath the ice surface, which may be razor thin in one spot and a foot deep in another.

The service responds to about 200 water and safety calls annually.

← Previous: New Highway Bypass Planned in St. Norbert Next: One Million CN Train Wheels to Be Made in Winnipeg →
Tags: City of Winnipeg | Red River | Weather