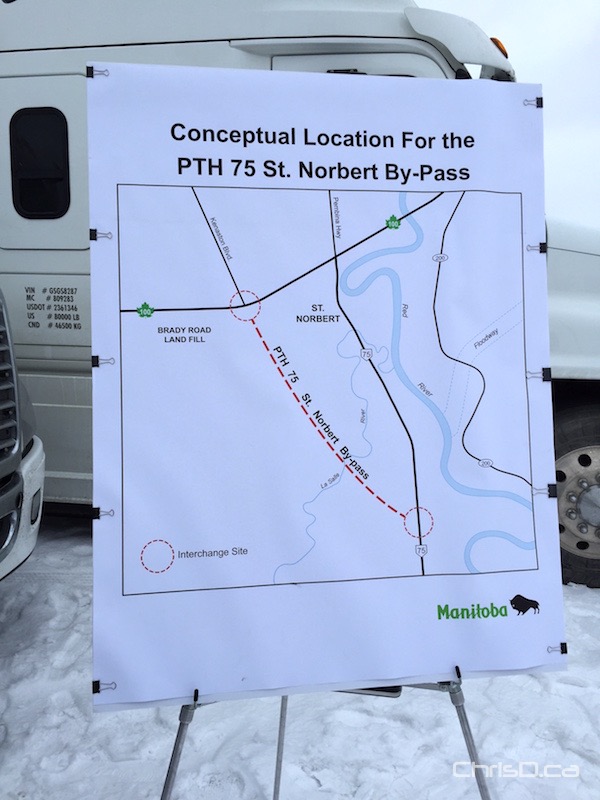 WINNIPEG — A new stretch of highway in south Winnipeg will soon bypass St. Norbert and improve traffic flow for motorists along Highway 75.

The province says the six kilometre, four-lane highway will include two cloverleafs and a bridge over the La Salle River to connect Highway 75 with the Perimeter.

“As our economy continues to grow, we will increase our investments in transportation infrastructure to ensure commercial and other traffic flows safely and smoothly through the capital region,” said Infrastructure and Transportation Minster Steve Ashton.

Ashton says the $400 million project is a much larger scale undertaking than the previously announced Headingley bypass.

An interchange will be built at Waverley Street and Kenaston Boulevard to tie in to the bypass, which Ashton said will have speeds of up to 100 km/h. Currently, truckers and other traffic coming into the city off Highway 75 are reduced to 50 km/h while travelling through St. Norbert.

Land acquisition is also part of the project, but Ashton couldn’t say how many properties would be affected.

“The planning underway now will position Winnipeg and Manitoba to grow the economy and ensure the capital regions has a high-quality transportation system well into the future.”

The province will hold public consultations to prepare functional designs of the St. Norbert bypass.

Construction is expected to begin in the next five years and be completed within 10, Ashton said.