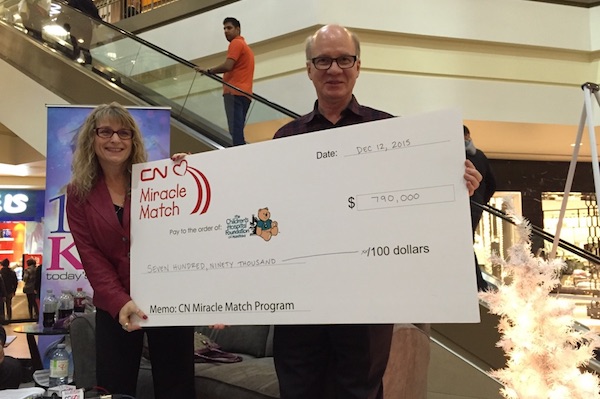 A large donation made to the Children’s Hospital Foundation of Manitoba over the weekend nearly hit the $1 million park.

CN presented a cheque at Polo Park Shopping Centre for $790,000 on Saturday as part of its CN Miracle Match program.

CN pledged earlier this year to match donations up to $300,000 to the Children’s Hospital Foundation of Manitoba’s public giving campaigns, including the Ice Crystal Gala, Third Party Events, and this past weekend’s Christmas for Kids at CF Polo Park.

The program was created in 2006 to rally communities behind the worthy cause of supporting children’s hospitals. More than $12 million has been raised for such hospitals in Canada and the United States since 2013.