Man Accused of Killing Tina Fontaine Had Long History of Violence: Parole Board 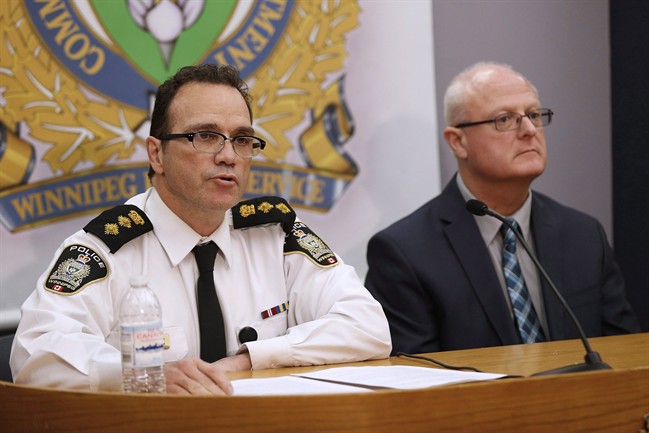 Deputy Chief Danny Smyth and Homicide Sergeant John O’Donovan, right, announce the arrest of Raymond Joseph Cormier, 53, a suspect in the murder of Tina Fontaine, in Winnipeg, on Dec. 11, 2015. Parole board documents show a man accused of killing 15-year-old Manitoba teenager Tina Fontaine has a long history of violent crime. Raymond Cormier was arrested last week in Vancouver and is charged with second-degree murder. (THE CANADIAN PRESS/John Woods)

Raymond Cormier, 53, was arrested last week in Vancouver and is charged with second-degree murder. Documents from the Parole Board of Canada detail Cormier’s “significant and violent criminal history.”

Tina’s body, wrapped in a bag, was pulled from the Red River in Winnipeg in August 2014.

The parole board revoked Cormier’s statutory release in 2012 after he had served time for robbery. It noted he was considered a “high risk to reoffend with violence.”

The 2012 report says Cormier had at that time racked up over 80 convictions — 17 of which were offences involving violence. Previous court documents show that since 1978, Cormier has spent more than 23 years in prison for various offences that include assault and theft.

“You have used your fists, a knife with a six- to seven-inch blade, a hunting knife and a butcher-style knife in the commission of your offences,” the report stated.

“You have a lengthy history of violent offending and are an individual who continuously breaches the terms and conditions of your release or have committed new offences while on release. You have a dismal supervisions history and continue to reoffend violently despite treatment.”

The board report says that Cormier’s violent behaviour began at a young age and that he continued to reoffend despite treatment.

“File information indicates that you were under the influence of illegal substances for most of your past offences and the assaults were most often during your attempt to steal money from your victims for drugs,” the report said. “You remain assessed as a high risk for future violent offending.”

Cormier’s lawyer, Pam Smith, did not immediately respond to attempts to reach her for comment, but the Globe and Mail quoted her as saying Cormier will be “contesting the charges.” Cormier’s case was scheduled to be in a Winnipeg court Tuesday.

Details of Cormier’s 2009 conviction for robbery include how he stole a vehicle from one victim and then robbed an elderly man, putting him in a “bear hug” and threatening him with violence. When Cormier was arrested, the report said, he had the victim’s wallet, a crack pipe and a knife.

The board also highlighted a bar fight Cormier was involved in during which “you stabbed your victim twice, once in the right hip and once in the left side.”

Calls for an inquiry into missing and murdered aboriginal girls and women grew in intensity and frequency in the weeks following Tina’s death.

She had only been in Winnipeg a couple of weeks after leaving her great-aunt’s home on the Sagkeeng First Nation, about 70 kilometres northeast of Winnipeg.

Police said Tina became an exploited youth in the Manitoba capital and met Cormier at a residence they both frequented.

Court documents allege Tina was killed around Aug. 10, 2014 — 10 days after she was first reported missing from foster care. Police picked her up two days before it’s believed she was killed, but did not take her into custody.

Tina’s family has said she was taken into the custody of Child and Family Services and placed in a downtown hotel, but ran away again shortly before she was killed.