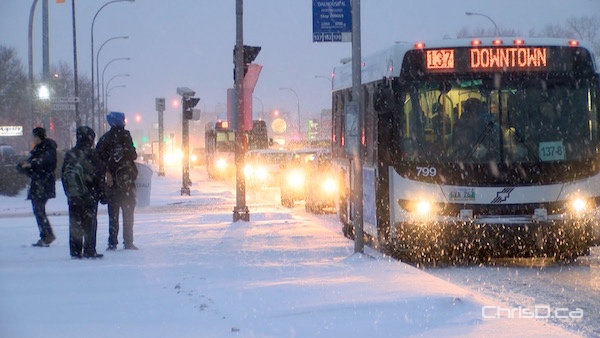 Commuters wait to board a bus headed to downtown Winnipeg on Wednesday, December 16, 2015. (CHRISD.CA)

WINNIPEG — The Colorado low weather forecasters were predicting to hit Winnipeg showed up just in time for the morning commute on Wednesday.

When it’s all said and done, about 10 to 20 cm of snow will have fallen on the city. A snowfall warning remains in effect for southern Manitoba, with significant snowfall for the Red River Valley, the Interlake, Whiteshell and Bissett regions.

“Weather radar early this morning indicated the snowfall was intensifying over the warning area and this trend will continue throughout the morning hours,” the statement reads.

The weather and road conditions were blamed on several accidents Wednesday, including a rollover on McPhillips Street just before the Perimeter Highway. Another vehicle slid into the ditch on south Lagimodiere Boulevard and a crash involving a school bus was reported on St. Anne’s Road near Warde Avenue. Early reports suggested up to eight people suffered minor injuries.

Road conditions outside the city are also reported as slippery with reduced visibility as blowing snow continues. Snow removal crews were out plowing and sanding as early as 4 a.m.

The snow should taper off by later this afternoon, with an additional 2 to 6 cm possible tonight.

VIDEO: How Wednesday morning's commute began for many Winnipeggers as #mbstorm rolled in. pic.twitter.com/gJpQyhx7W7