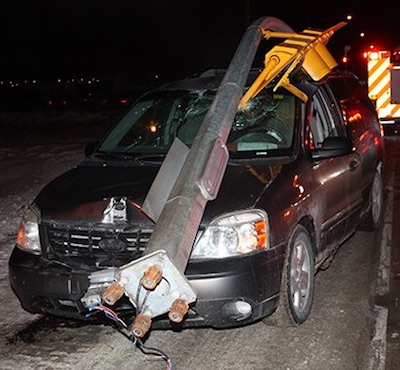 The driver of a Ford minivan crashed into a traffic light and kept on driving for nearly 1 km, RCMP say. (TWITTER / RCMP)

The driver of a minivan continued to travel for 1 km after crashing into a light standard in Headingley on the weekend.

Manitoba RCMP say the 48-year-old driver was allegedly impaired when the crash happened on the Trans-Canada Highway in the early hours of December 19.

The van eventually stopped after it broke down.

Police say no one was hurt in the incident.