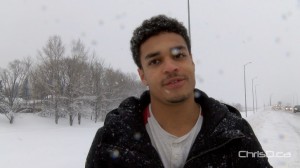 Jayden McKoy wasn’t injured when his SUV slid into the ditch on the South Perimeter Highway, Wednesday, December 23, 2015. (CHRISD.CA)

WINNIPEG — Treacherous driving conditions were partially to blame for several crashes in and around Winnipeg on Wednesday.

At least one on the South Perimeter saw a Honda CRV take to the ditch westbound between St. Mary’s Road and Pembina Highway.

The driver — U of M Bisons defensive back Jayden McKoy — was uninjured in the incident, which happened at around 9 a.m.

“I guess I ended up going a little bit faster than I expected, and it’s super, super icy slippery out here,” McKoy said.

McKoy said he was travelling about 105 km/h when he realized it was too late to stop and avoid hitting another vehicle in front of him.

Elsewhere around the Perimeter, three semi-trailer trucks got stuck near the interchange at Fermor Avenue at around 6:30 a.m. Two more semis became stuck at the same location shortly before 8 a.m.

Another vehicle rolled over near the Perimeter and Pembina Highway at around 7:45 a.m.

Winnipeg picked up about 10 cm of fresh show overnight Wednesday. Environment Canada says the system should taper off by late this afternoon.